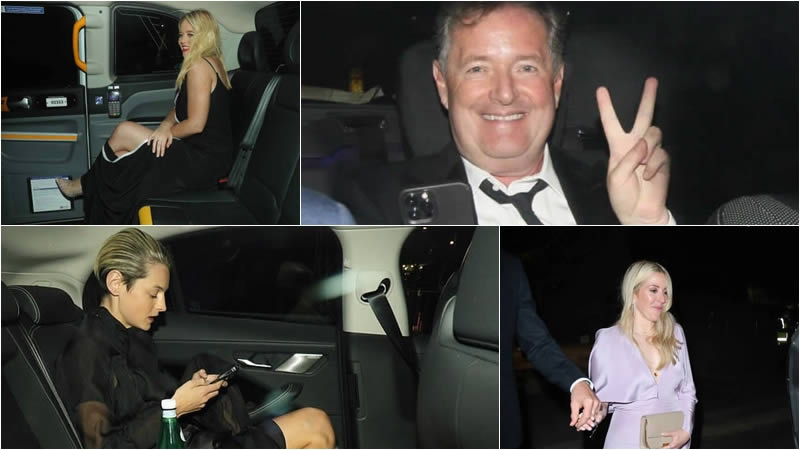 Famous people piled out onto the street outside upscale London venue 180 Strand, after partying the night away.

Emily, 31, was photographed grasping the hand of her male friend after stealing the show on the red carpet earlier in the evening.

As she went out of the venue in a long black dress, the celebrity kept her eyes on the floor and clutched the two goodie bags from the evening.

Her hair stayed nicely styled as she maintained her composure on the short walk across the street to a cab waiting to take her home.

Other celebs, on the other hand, abandoned their high-heeled shoes as they left the celebrity-packed members club.

The chart-topping hurried away in her silky purple outfit, clutching her nude bag and keeping her head down to avoid the cameras.

The Crown star Emma Corrin, who rose to fame playing Princess Diana in the drama, also went shoeless as she rushed home with a friend.

Meanwhile, Piers Morgan appeared to be in high spirits as he walked out of The Tate Modern..

Just hours before donning his suit and tie for the hot event that was thrown by Idris Elba, the TV personality, 56, celebrated an Ofcom victory against Meghan Markle.

The 30-year-old singer, who had enjoyed the night till the finish, jumped into the back of a black cab to be taken home at 3.30 a.m.

Pixie, wearing a gold dress with gold-strapped shoes and earrings, appeared to be keeping her eyes closed for the journey home.

Laura Whitmore, the host of Love Island, and footballer Gary Lineker were among those seen striding through London streets on their way home.

Maya Jama, on the other hand, turned heads after changing from a long black dress to a much shorter one to be more comfortable.

Ed Sheeran turned heads on the red carpet but seemed to skip out on the party after the event in favor of going home to wife Cherry Seaborn.

HOTTEST NIGHT OF THE YEAR?

The GQ Men of the Year Awards, in its 24th year, celebrates the best deserving men and women in their respective fields, from acting to innovation.

Last year was the first-ever virtual GQ Men Of The Year Awards, but at long last celebrities were able to come together in person for the 2021 ceremony.

The winners of this year’s event did not go home empty-handed, as GQ reported that they received a goody bag worth more than £12,000 in celebration of all their achievements.

In the meantime, guests were fed by Clare Smyth of Core, the UK’s only triple-Michelin-starred restaurant run by a woman chef.

This year, the magazine hired husband and wife Idris Elba and wife Sabrina Dhowre to host the star-studded ceremony.

Organizers have promised the awards will celebrate “those who have shaped the world’s cultural landscape in style, entertainment, and sport throughout 2021“.

Before the event, the married couple said in a joint statement: “We are excited to host this year’s GQ Men of The Year Awards 2021 in London“.

“In their various ways, the GQ Men of The Year award winners have kept all of our spirits up throughout one of the most difficult years and we are very much looking forward to celebrating with them – and hosting a great party!”

Nick Sargent, publishing director of British GQ, said: “After the unprecedented year we’ve had, I’m thrilled to announce the return of the GQ Men of The Year Awards for 2021 as a live event.

“Even though our virtual event last year was a huge success, it’s exciting to be able to come together again in person to celebrate the incredible talent who best represent GQ and continue to push the boundaries on the world’s cultural stage.

“It will be a night to remember.”