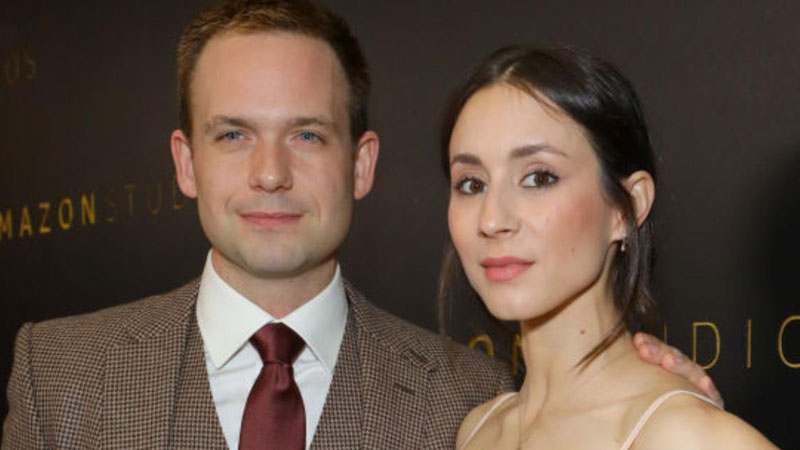 Suits’ Patrick J. Adams & wife Troian Bellisario welcomed their second child — daughter Elliot in May 2021 and the couple are now opening up about the experience of welcoming their daughter. Unlike other couples, Patrick and Troian’s story of their daughter’s delivery is different and will definitely leave you baffled as they welcomed her in their very own car.

Yes, you heard that right. The couple joined Katie Lowes for an episode of her podcast Katie’s Crib and revealed the details. For the birth of her first child, Troian revealed that her labor pain lasted for around 26 hours and that is why she did not start panicking when she first sensed contractions during her second delivery. The couple was on their way to the hospital when she started getting increasingly uncomfortable.

On the podcast, she said, “I’m starting to have to push my seatbelt away from me… I’m in a lot of pain, but I’m also like, ‘I can’t be in this position anymore’.”

Patrick revealed that the contractions began to get intense as they neared the hospital. “As soon as I hit the button and get the ticket, she’s screaming. I whip around, and by the time I turn my head around, Troian is fully on her hands and knees and we’ve gone nuclear.”

The Suits actor elaborated that he had to reveal the seriousness of the situation to the security and zoom into the hospital parking lot. But by the time medical staff help arrived, Troian was almost in no position to get out of the car as their baby was already crowning.

She said, “I scream, ‘Get my pants off! Pull my pants down!'”. Husband Patrick painted a vivid picture as he added, “So she is still on all fours, butt facing the windshield. Her butt’s at my head level, so I just go and pull down her pants. and (the baby’s) head is right there.”

The actor revealed that he tried to maintain calm and decided to take the situation in his own hands. Luckily, he had learnt and seen things around the first time. “There was no room for panic. You just need to deal with this situation. And remember, what we’re describing all took place in the span of about three minutes,” Adams revealed.

He quickly checked for the umbilical cord and stated, “One more push and the baby was all the way out.” All of this took place in the hospital’s parking lot.

Troian added, “I just look over my shoulder, because I’m still on all fours… and I see Patrick holding her upside down, and she’s wailing, so I was like, ‘She’s alive, she’s OK. She’s breathing.”

Does Cell Phone Cause Hair Loss? The Truth is Out!

The Duke and Duchess of Sussex Are In Trouble Once Again, Accused Of Lying!

DMX Leaves Behind An Unexpected ‘Fun Fact’ About Himself