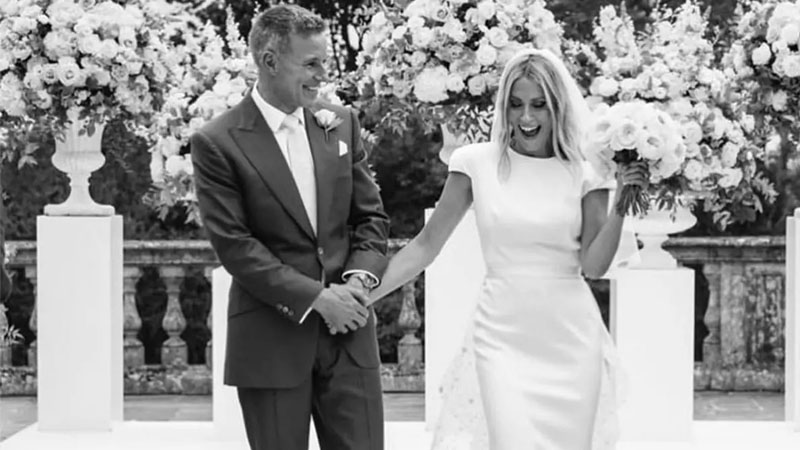 Congratulations are in order for Nicole Appleton, who recently got married to her long-term boyfriend, Stephen Haines, in a private ceremony.

The All Saints singer announced the news to her followers on social media, posting lovely black and white photos from her wedding day with the sweet and simple caption ‘I do.’

In one, the overjoyed pair can be seen in close-up beaming at the camera. In another, Nicole showed off her wedding gown as she stood with her new husband in front of a floral backdrop.

Nicole’s dress was simple but elegant, with no hints of a princess gown in sight.

The dress had a modest fitting bodice with cap sleeves that hugged her waist and flared out to emphasize her amazing curves.

Nicole went all out with her veil, which was floor-length and featured a beautiful embroidered pattern, and she wore her long blond hair in her signature loose waves.

Her surprise wedding comes after she and Stephen welcomed their baby girl, named Skipper, in March 2020, after keeping the pregnancy a secret.

She and Stephen, who is said to be a commercial director at Facebook, made their relationship official in February 2019 but are known to have been dating since November of the previous year.

Nicole was previously married to Liam Gallagher until 2014. The marriage ended when he fathered a child with New York Times journalist Liza Ghorbani.

Liam and Nicole have a son, Gene, who is now 19, and the Oasis frontman is also rumored to be planning a wedding this year after proposing to his other half, Debbie Gwyther.

The pair was supposed to get married in Italy last year, but they postponed it because they didn’t want to wear face masks on the big day.

Nicole’s love life recently made headlines again, this time due to an alleged dispute with Lily Allen over a book the singer was reportedly writing about a relationship she’d had with Liam when he was married to the All Saints’ singer.