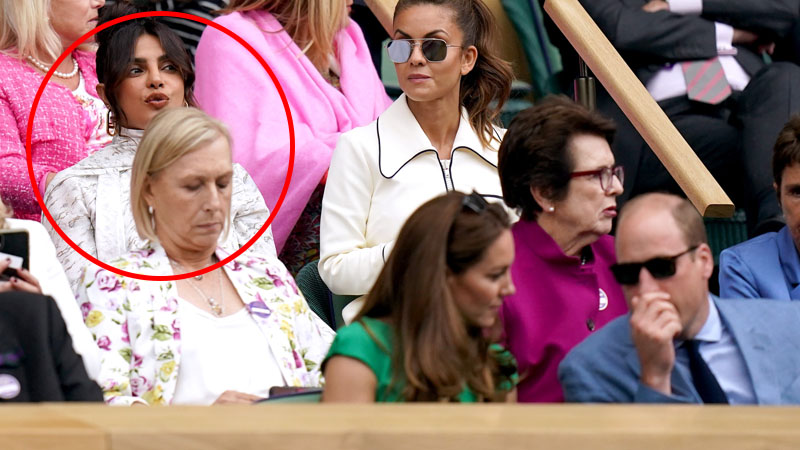 Prince William and Kate Middleton have been supporting the home country during Wimbledon when England lost to Italy in the Euros final. Including royals, many renowned faces were gathered for sports events including a close pal of Meghan Markle’s – Indian actress, singer, and film producer, Priyanka Chopra.

She showed up at Wimbledon Day 12, the Women’s Singles Finals, just two rows behind William and Kate in the royal box. But a few royal experts jeopardized a type of coldness between the two parties.

The video got viral in which Priyanka can be seen settling her scarf while William and Kate are sitting in their seats. While seeing the footage, royal spectators took to Twitter to discuss ‘scarf-gate’.

“Priyanka Chopra (Meghan Markle’s BFF) not clapping for Kate and Will has sent me to the f***ing moon,” one user wrote. “She said, ‘Who? Anyway lemme fix my dress first,” another user joked.

Someone highlighted a possible parallel between Priyanka fixing her scarf in the same way that Prince William did when leaving Christmas at Sandringham in 2018. Then, it was described that William was deliberately giving Meghan the cold shoulder.

While seeing the clip, a user stated, “Also seems like Priyanka is having her scarf moment the way Prince William had as he was trying to ignore Meghan”.

Here point to be noted is that Priyanka was present at Prince Harry & Meghan’s wedding in 2018, newidea stated.