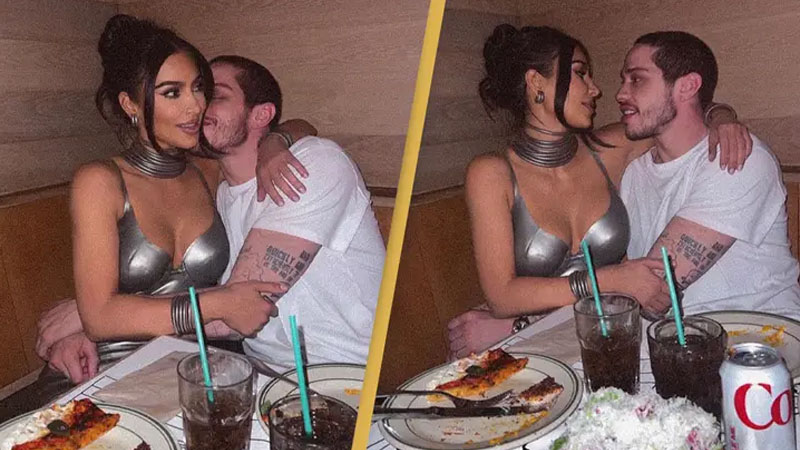 Kim Kardashian has opened up about her relationship with Pete Davidson, saying it’s ‘sweeter and more fun.

The reality star first started dating Davidson after her appearance on Saturday Night Live last year, spotted enjoying dates at theme parks and dinners together. Soon after, they were on social media in matching pajamas and jetting off to the Bahamas.

Now, much to Kanye West’s chagrin, the pair are firmly in a relationship. Even Kardashian is surprised at how things have progressed.

During a recent appearance on Hoda Kotb’s Making Space podcast, Kardashian spoke about her relationship with Davidson.

She said: “I took like, you know, 10 months or something before I dated or talked to anyone [after her split from West].

“And I just wanted that time to really figure out and go through the motions… am I making the right decision? How do I feel about this? You’ll never know unless you’re put in situations.”

She went on to say: “Sometimes things happen when you just least expect it. It was the last thing that I was really planning on.

“And so when it did happen, we were kind of like, ‘Oh my God, I wasn’t planning on this. And this isn’t even what I was thinking of.'”

Kardashian said the spontaneity of it all ‘just makes it that much sweeter and so much more fun.

While the pair have spoken about their relationship previously and are seen in photos together more than ever, Kardashian doesn’t want everything to be out there in the open.

She said: “I do think that I am holding, you know, a little bit more close to my heart on certain aspects of my relationship with Pete, and it feels good just to know that, like, we have this connection and we have our little bubble of a relationship world that we live in that, like, not a lot of people know about.”

Recalling one particularly ‘sweet moment’, Kardashian said: “We were driving in the car yesterday and I just, like, looked at him and I was like, ‘Thank you.’

“And he was like, ‘What?’ And I was like, ‘For running errands with me, like, this is so much fun just to, like, go to a doctor’s appointment or go to the dentist and just, like, run errands. I’m having so much fun.”