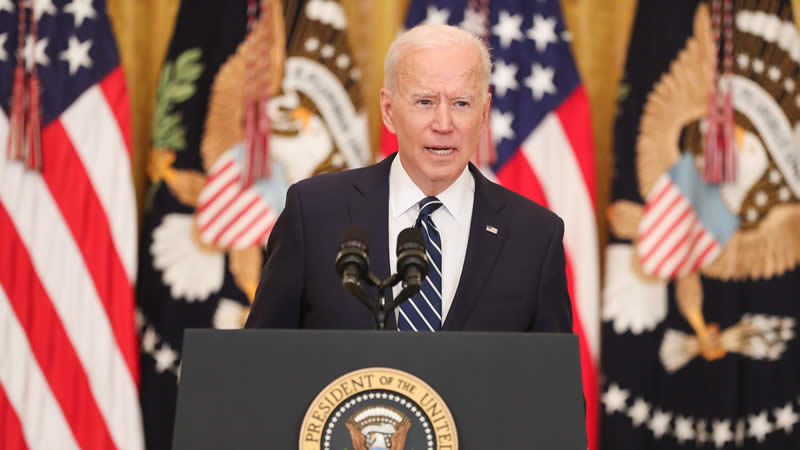 Joe Biden wrapped up his first formal press conference, lasting about an hour, by telling the reporters gathered, “But folks, I’m going.”

Very quickly, Fox News keyed into the fact that Biden did not call on its White House correspondent, Peter Doocy, who was in the East Room, even as Biden called on reporters from the other major networks.

“Peter Doocy was not given a question, which is of note as well,” said Fox News’ Martha MacCallum, as the chyron read, “Biden signed 37 EOs but holds just 1 news conf.”

News outlets called upon during the press conference: Associated Press, PBS, The Washington Post, ABC News, The Wall Street Journal, NBC News, CBS News, CNN, Bloomberg and Univision. A typical press conference features reporters from across the country, including a number from lesser known news outlets, but Covid-19 restrictions limited the number of correspondents allowed in the room.

During the campaign, Doocy asked Biden questions about his son Hunter. Earlier on Fox News, Dana Perino had suggested a “curveball” question, “Just today we have learned of another story involving your son Hunter, this time surrounding a 2018 firearms incident in which your daughter in law allegedly threw Hunter’s handgun in a trash can behind a grocery store behind a high school. Ultimately the Secret Service intervened despite the fact that you were not under Secret Service protection at the time. What do you know about the involvement in the case of Hunter’s handgun?”

A spokesperson for Biden told Politico that he has no knowledge of Secret Service involvement.

Joe Biden told reporters that his plan is to run for reelection in 2024, before saying that it is his “expectation” that he would be in the race.

At the Biden’s first formal press conference since taking office, CBS News’ Nancy Cordes first asked him whether he decided whether he would run.

“You haven’t set up a re-election campaign yet as your predecessor had by this time,” Cordes said.

“The answer is yes. My plan is to run for reelection. That’s my expectation.”

CNN’s Kaitlin Collins also pressed him on whether he thought that he would be running against Donald Trump again.

Biden, however, dismissed the early focus on the next presidential election, telling her, “I have no idea. I have no idea if there will be a Republican party, do you?”

Speaking in the East Room to a greatly reduced number of reporters, about two dozen, all socially distanced at least six feet apart, Biden said, “No other country has come close to what we are doing.”

He also said that in the next 35 days they also will meet a goal of getting a majority of schools reopened five days a week.

The press conference was Biden’s first formal one since taking office, as many in the media noted that he had waited much longer to do so than his predecessors. That triggered coverage of how the White House was carefully stage managing Biden’s every word, given his propensity to make verbal gaffes, although the president has routinely taken questions from reporters at various events.

The anticipation for the event was apparent as networks covered the press conference with their star anchors, and Fox News even created a countdown clock. There was no shortage of recommended questions: Dana Perino and Bill Hemmer even offered a list of questions they would ask, including “Would you concede that President Trump had the right strategy to finally stand up to Beijing?”

The first question came from Zeke Miller of the Associated Press, and the current president of the White House Correspondents Association. He asked Biden how he will get his agenda through Congress given no Republicans voted for his Covid-19 relief plan.

“I have been hired to solve problems, not create division,” said Biden, who is seeking major progress on immigration reform, gun reform, and climate change.