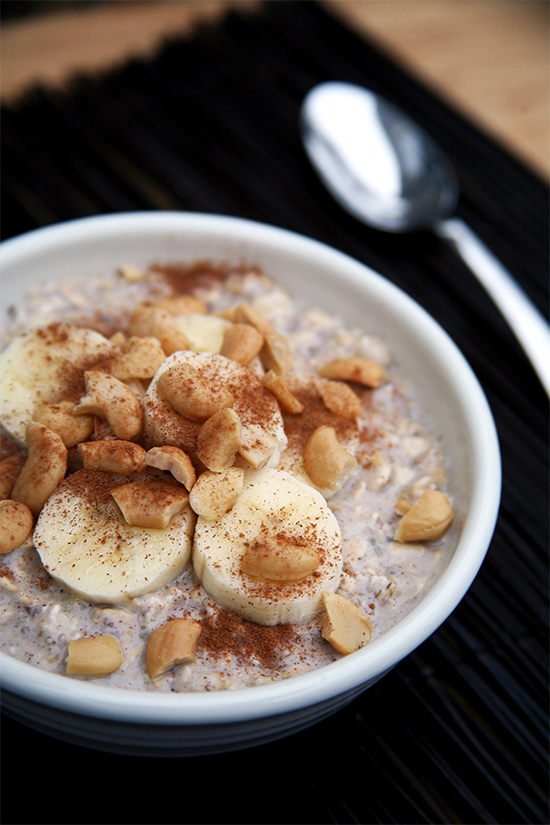 Despite eating (what I thought was) a wholesome breakfast every morning, the pounds weren’t dropping. So why was I not losing weight? All the experts say breakfast is key to boosting metabolism, after all. I didn’t realize I was making three huge mistakes, but once I changed them, I could see the difference in how my body looked.

Cereal was my go-to breakfast all the way from elementary school through college. Although sweet, delicious, and easy, it was the worst breakfast for me. It’s full of sugary carbs and not much fiber or protein. I even went for the healthy stuff like Kashi’s GoLean Crunch, granola, and Raisin Bran, but cereal is cereal, and it’s not the most nutritious choice on the menu. I started focusing on getting 13 to 20 grams of protein, at least six grams of fiber, and 10 to 15 grams of healthy fats. So I ditched the boxes for a blender and started sipping on smoothies. I also do overnight oats because it reminds me of cereal — I’m huge fan of the brownie batter and banana cashew.

What Time Is It?

Not sure where I heard that you’re supposed to eat first thing in the morning and to never skip breakfast, but I followed that advice diligently. I ate within a half hour after waking up, around 7:30, even if I wasn’t hungry (99 percent of the time I wasn’t). I’m convinced it turned on my hunger because by 9 a.m., I was starving, which translated to eating two breakfasts, and that meant twice the calories. No wonder I wasn’t slimming down! Now I wake up, get in a workout, and usually don’t feel hungry until 9 or 10. Listening to my body’s cues when it comes to breakfast has carried through to other parts of my day. I eat when I’m hungry, not when the clock tells me to.

Another huge mistake? I never measured anything. When I was eating cereal, I grabbed a huge bowl — way bigger than your typical soup or salad bowl — and poured with abandon. I usually mixed three different cereals; added raisins, nuts, and blueberries or banana; and used Very Vanilla soy milk. Holy calories! No joke — my bowl was easily pushing 600. Same went for oatmeal, yogurt with fruit and granola, toast, or smoothies. I got out my cups and spoons and measured everything, making sure it was around 400 calories. To this day, I still measure everything to avoid accidentally eyeballing higher amounts.

The post I Made These 3 Changes at Breakfast and Finally Started Losing Weight appeared first on Womenz Magazine.

Kim Kardashian’s Heartbreaking Announcement—We Feel SO Bad For Her!