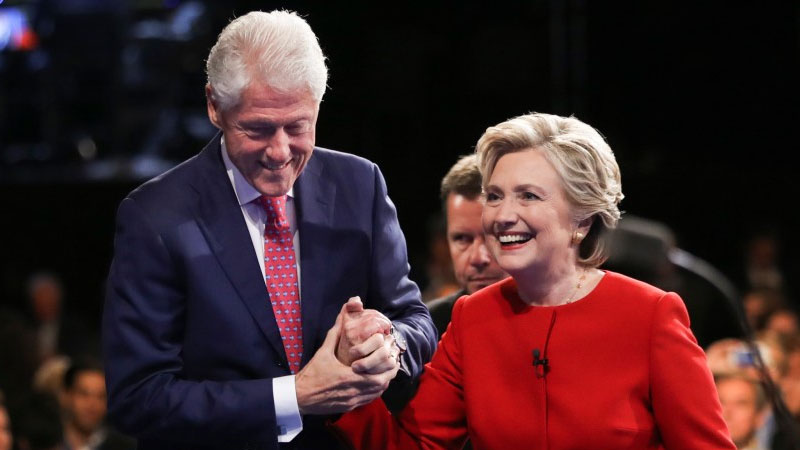 Hillary Clinton has, allegedly, decided to file for divorce from Bill Clinton.

According to Globe, Hillary Clinton is furious after learning that her husband flirted with Sting’s wife, Trudie Styler.

The tabloid came up with their dubious story after claiming that Bill completely ignored his wife while they were having dinner in New York because he was focused on Styler.

Did Bill Clinton cheat on Hillary Clinton with Trudie Styler?

At one point, Styler also, allegedly, placed her head on Bill’s shoulder. And this shocked the former first lady.

“Hillary was so humiliated she nixed a group picture and had daggers in her eyes as she marched Bill out of the restaurant to the car, whisking them home,” an onlooker claimed.

“Hillary has put up with Bill’s roving eye and countless public embarrassments for years. And now that both their political careers are in the rearview mirror, she’s ready to give him the heave-ho,” the source said.

Since Bill is no longer president, the source alleged that Hillary has no reason to put up with him.

In fact, earlier this year, the couple already sparked rumors that they have divorced. A photo of them looking as distant as ever, allegedly, circulated online.

A certain body language expert analyzed Hillary Clinton and Bill’s photos and said that they didn’t look like a couple in the snap.

“You would not know they are a couple. There is not a connectedness like a husband and a wife,” the source said.

Meanwhile, the tabloid also linked the former POTUS with Ghislaine Maxwell, who is currently detained in prison.

Hillary, allegedly, knows about the affair. And before she could get dragged on to it again, she, allegedly, decided to file a $250 million divorce against her husband.

“The Trudie episode was the last straw. Hillary doesn’t need Bill. And she definitely doesn’t need all the embarrassments that come with him,” the source said.

However, one should take the tabloid’s claims with a grain of salt.

There is no indication that Bill cheated on Hillary with Styler. And it’s not also true that he had an affair with Maxwell.

So, the tabloid’s claims that Hillary Clinton has filed a $250 million lawsuit against her husband aren’t accurate.

7 Ways to Upcycle Your Maternity Clothes After Pregnancy