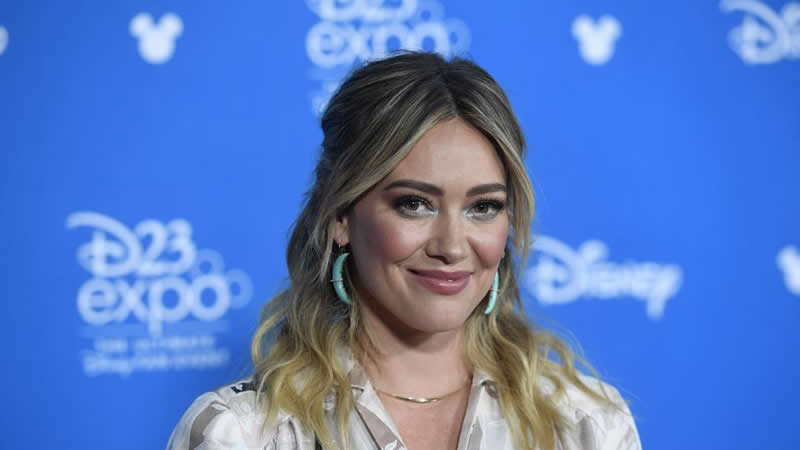 After announcing the arrival of the newborn earlier in the week with an adorable photo of newly minted big sister Banks, who was born in 2018, Duff shared an intimate photo of her home water birth on Saturday.

The powerful black-and-white photo shows Duff holding the newborn in a birthing pool next to Banks. Her 9-year-old son, Luca, whom she shares with ex-husband Mike Comrie, and Koma watch on in awe.

The Disney Channel alum was immediately flooded with congratulations from fellow celebs and co-stars. “Younger” actor Molly Bernard, who serves as godmother to Banks, shared a moving account of Mae’s birth.

“I have never witnessed any event that is simultaneously expansive and so finite, so personal. The grace that both Hilary and Matthew have is truly limitless,” she wrote on Instagram alongside a photo of herself cradling the newborn. “The go-time moments before Mae was born left me with the distinct feeling of surprise that the room wasn’t levitating with the abundance of supportive and focused energy. It is no small thing to bring a child into this world, and I am basking in amazement at the strength of my friend. Her patience, ferocity, groundedness, clarity, and love.”

Duff announced that she was expecting her second child with Koma in October by uploading a video of the musician rubbing her stomach and captioning the footage, “We are growing!!! Mostly me…”

The star has regularly chronicled her motherhood journey on social media, but she pledged to keep the details of her pregnancy under wraps this time around.

“We had a gender reveal with Banks and it was such a fun memory,” Duff told People. “Unfortunately, during these times we felt it wasn’t really appropriate. The way we are creating some excitement within the family is to wait to find out the sex on the baby’s birthday!”

Despite the hardships of being pregnant and giving birth during the ongoing pandemic, Duff said her third pregnancy felt easier than her previous two, explaining there was a “comfort I didn’t have the first time around.”

“This pregnancy feels easier because there was a lot of fear with bringing a new baby home when Luca was already 6½,” she told the outlet. “I’m more tired because of having a toddler, but have less time to focus on the pregnancy because I’m busy with my kids and work. It’s a nice distraction because I’m not googling everything and obsessing over everything that’s happening with the pregnancy.”

Duff also had a home water birth for Banks, which she described to People as “such a happy moment and also scary” — although she added that she “would totally do it again.”

Five months after giving birth to Banks, Duff shared deeply personal footage of her first moments with the baby.

“I’ve been wondering for a long time if I would ever share this video as it is extremely personal,” she wrote in an Instagram caption at the time. “It was so absolutely lovely and rewarding (and shocking) that after giving birth to my baby girl we hugged …for the first time. In my mind, I like to believe that she was saying, good job mom. Go team goes. We did it. Together.”

Meghan Markle and Prince Harry’s Oprah interview was not ‘appropriate,’ says Prince Albert: ‘It did bother me’