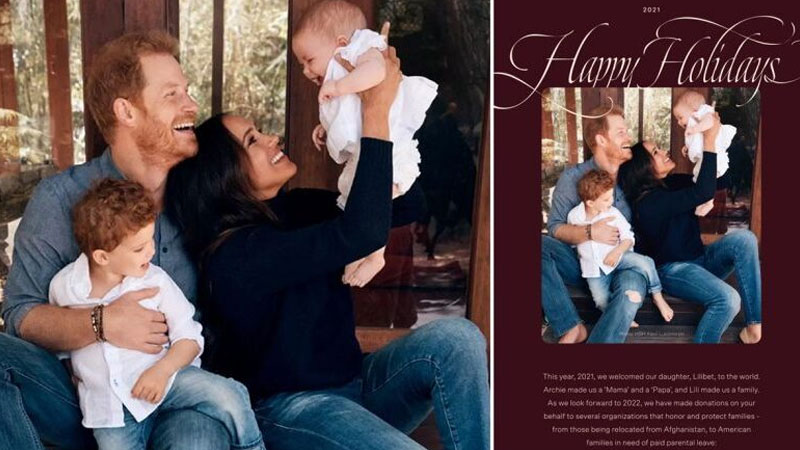 Prince Harry and Meghan Markle have released a new photo from their 2021 Christmas card, and the Duke of Sussex’s look in the snap is raising some eyebrows.

The Sussex 2021 Christmas card featured the first-ever public photo of Prince Harry and Markle‘s 6-month-old daughter, Lilibet, who is being held up by her mom, as well as the latest picture of their 2-year-old son Archie, who sits on his dad’s knee.

In the sweet snap — which was taken in the summer at the couple’s Santa Barbara, California, home by their wedding photographer Alexi Lubomirski — Prince Harry, Markle and Archie coordinated in denim jeans, while baby Lili wore a frilly white set. The Duchess opted for a dark sweater and nude flats, while her son sported a white button-down shirt to match his sister.

“The Sussex children look very sweet and smiley. Is Harry trying to make a financial point that he has no shoes and his jeans are torn? Or is he just trying to be with the teenage gang?” wrote royal commentator and journalist Angela Levin, author of “Harry: A Biography of a Prince.”

Some users not only criticized Prince Harry’s look but also the message that he and Markle included in the Christmas card, which was first shared by Team Rubicon, a non-government organization that supports international disaster relief. “As we look forward to 2022, we have made donations on your behalf to several organizations that honor and protect families – from those being relocated from Afghanistan to American families in need of paid parental leave,” Prince Harry and Markle wrote.

One Twitter user commented, “I am with you, Angela. No torn jeans, and socks, and shoes, thank you. Also the donations I could have done without. It is a Christmas card, not a political flyer.”

“I think they wanted to convey that they are a simple, normal family. You know, intentionally trying to pull at heartstrings. What they try to always do and end up failing,” another suggested.

One netizen joked that the couple’s budget went to Markle’s wardrobe and Prince Harry had to “purchase his clothes at American Eagle.”