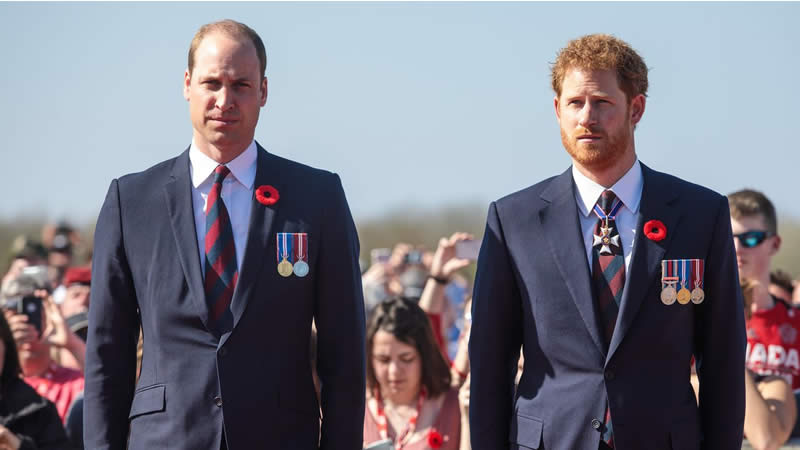 Were Prince William and Prince Harry caught on camera having an “explosive fight” at Windsor Castle? That’s what one cover story is reporting this week.

This week’s edition of New Idea reports that Prince Harry and his brother, Prince William, had a massive showdown at Windsor Castle while Harry was in London for the unveiling of the Princess Diana memorial.

The tabloid insists all hope for reconciliation between the brothers has been lost after an “ugly confrontation” at Harry’s Frogmore Cottage. According to the report, Kate Middleton originally arranged their meeting but didn’t anticipate it to go so horribly wrong.

An inside source tells the tabloid, “It was hard enough for aides to organize this tribute to Princess Diana with her sons barely on speaking terms. But Harry made it even more difficult than it had to be. He wouldn’t go to rehearsals, he refused to share the details of his speech in advance and basically made everyone very nervous. William was spitting venom.”

The tabloid explains that while William was ready to play nice with Harry, he and other members of the royal family had been hurling insults at Harry’s wife, Meghan Markle. The source contends, “Harry has an ego on him the size of California so when that happened, there was no way he’d back down.” The outlet then recounts the bullying accusations that have been leveled against Meghan Markle, insisting Harry’s “hypocrisy” is what infuriates William.

The source explains, “Neither brother thinks they are in the wrong, and both are headstrong, emotional, and proud — it’s a bad combination,” adding, “No-one knows exactly what was said, but it’s clear there’s zero chance of them coming back from it now. It’s such a shame, given this, all happened when they were meant to be honoring Diana — who would be upset about all of this.”

This whole report is a total bait-and-switch. The actual article doesn’t deliver on a couple of key promises from the cover of the magazine. First of all, the alleged fight was definitely not caught on camera.

Aside from the tagline on the cover, this claim is completely abandoned in the body of the article. And despite noting that “the showdown took place at Windsor Castle” and providing a picture of the castle entrance, the story instead claims the argument went down at Frogmore Cottage.

Furthermore, all footage of the unveiling shows the brothers cooperating with one another. A source told People that the event “was their idea and it was a joint effort.” Clearly, Harry arrived in England in good faith and the unveiling went off without a hitch.

As for the alleged argument, the tabloid provides no details on the confrontation itself, and it’s unclear where this story is coming from. Both brothers looked quite happy while they were alone together. While we can’t speak to the current state of Harry and William’s relationship, it’s clear this story was a total fabrication.