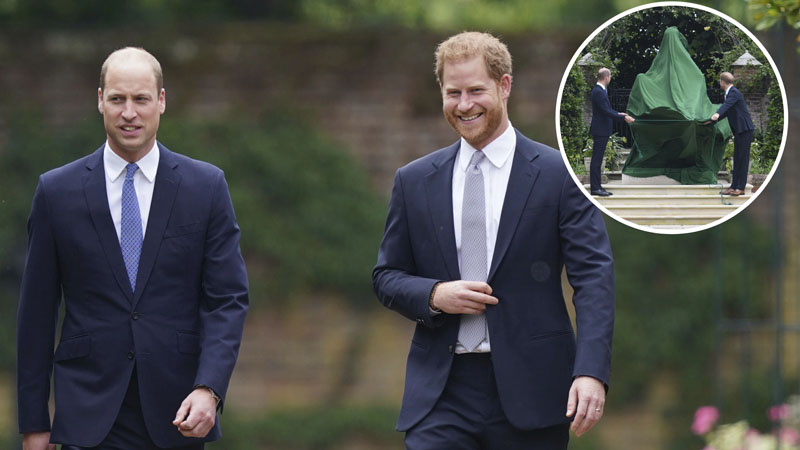 It was a moment royal watchers have been waiting on for months. Prince Harry and his brother, Prince William, set aside their feud so that they could unveil a statue in honor of their late mother, Princess Diana, on July 1, 2021, on what would have been her 60th birthday.

Due to COVID-19 protocols, the event was pared down to only include members of Diana’s family in what turned out to be a much more intimate event in the Sunken Garden of Kensington Palace. That made the focus all the greater on how William, 39, and Harry, 36, would interact with each other amid their three-year feud.

All eyes were on the Duke of Sussex, in only his second appearance in the U.K. since he and wife Meghan Markle officially relinquished their royal duties in March 2020 and moved to California. Harry returned in April 2021 for the funeral of his grandfather, Prince Philip, albeit to a reportedly frosty reception from members of the royal family. He and William appeared to have a brief yet cordial exchange while walking out of the ceremony.

At the unveiling, Harry appeared close with Diana’s sisters, Lady Sarah McCorquodale and Lady Jane Fellowes. He has remained tight with his aunts, who scored a coveted invitation to Harry’s son Archie’s christening in July 2019. They even appeared in the official royal family portrait from the event. Also present at the statue unveiling was Diana’s brother, Charles, the 9th Earl Spencer.

Harry missed seeing his sister-in-law, Duchess Kate (née Middleton), as she did not attend the official unveiling. Instead, William chose to have a private viewing ahead of the event to show his wife and their three children — Prince George, Princess Charlotte, and Prince Louis — the statue in an intimate family moment. Harry’s wife, Meghan, stayed at home in California with the couple’s baby daughter Lilibet Diana and their son Archie.

Fortunately for Harry, he wasn’t in the company of the entire royal family like he was at Philip’s funeral. He reportedly received a cold reception from his relatives, especially considering his CBS interview where he insinuated that his family was racist towards Meghan. He also said they turned a blind eye when she claimed to have had mental health issues. Harry went on to accuse his father, Prince Charles, of cutting off his funding, after the couple decided to step down as senior working royals to seek their own financial independence in the U.S.

Charles, 72, chose to skip the ceremony, as he didn’t want to be a distraction. He was married to Diana from 1981-1996. An insider told the U.K. Times that “He does find it terribly difficult. These moments have the potential to resurface old wounds, and it brings back memories for him; happy, sad, regretful. Since Diana’s death, he has felt it’s best to keep those memories to himself and leave his sons to it.” Diana died in a car crash in Paris on August 31, 1997, nearly a year to the day after their divorce was finalized.

Charles is believed to be Scotland with his mother, Queen Elizabeth. The 95-year-old Monarch headed north on June 28 to celebrate Royal Week, or Holyrood Week, as it is known in the country. The event honors Scottish culture, achievement, and communities. That meant Harry avoided any awkward run-ins with his father and grandmother, who he accused of passing on “genetic pain” to him during the Apple + docu-series The Me You Can’t See.