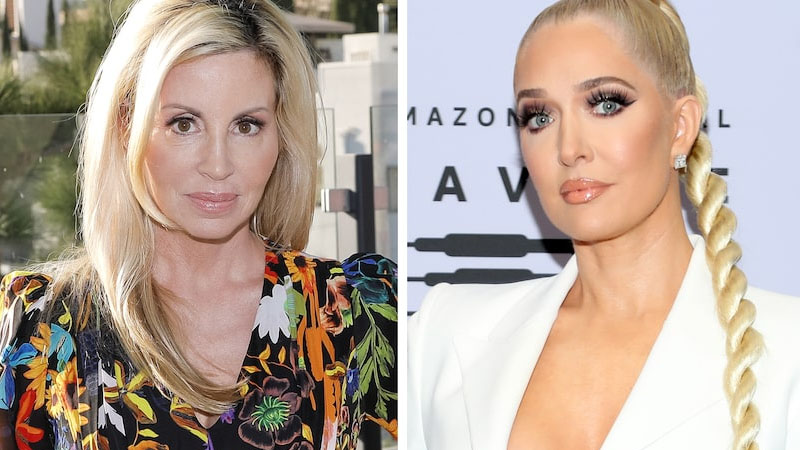 Camille brought up Erika’s waterproof mascara in her shady tweet. Camille Grammer appears to think Erika Jayne’s tears on “The Real Housewives of Beverly Hills” are those of a crocodile.

On Wednesday’s episode of “RHOBH,” the “Pretty Mess” singer was indeed a pretty mess, as she broke down in front of Kyle Richards over claims her divorce from Tom Girardi was nothing more than a “scam.”

The former couple has been accused of faking their split to help conceal their involvement in an embezzlement case, which accuses Tom of keeping money owed to the families of the victims of a jet crash. Erika has denied these claims.

As the dramatic episode unfolded, Camille took to her Twitter to post, “Omg! #rhobh is so messy rt now So much to unravel,” to which a fan responded, “I wish you were there to yell ‘Shut it down!!’ every time Erika started to cry.” With that, the former “Club MTV” dancer decided to take a trip down memory lane to throw some shade at Jayne.

“We filmed in the Bahamas season 9 and we were all swimming in the water,” she tweeted. “I don’t remember seeing EJ’s mascara run after swimming underwater. Just saying.” Some of Camille’s followers were quick to support her argument, saying Erika’s crying didn’t add up to them either.

“I knew it was cheap mascara used for effect. She made no attempt to wipe her face. If you’re crying all the time like she said she was…wouldn’t you carry a tissue? Please. I don’t buy any of her actions and never have,” wrote one user in Camille’s corner.

However, others pounced on Camille, claiming her comments were insensitive, as a fan clapped back, “You need to really let this show go. I’m feeling really sorry for you at this point.” During the episode, Erika continued to push back on the claims her divorce was a fraud.

“Nobody wants to be in the position I’m in right now,” she added. “It’s really unenviable being the possible target of a federal criminal investigation is, like, not cool. To have all of those things said about you, which are not true, and then to have everyone basically question everything. It’s lonely and it’s quiet and you would be shocked how quickly people turn on you.”

Katy Perry opens up on marriage to Russell Brand: ‘It was just like a tornado’