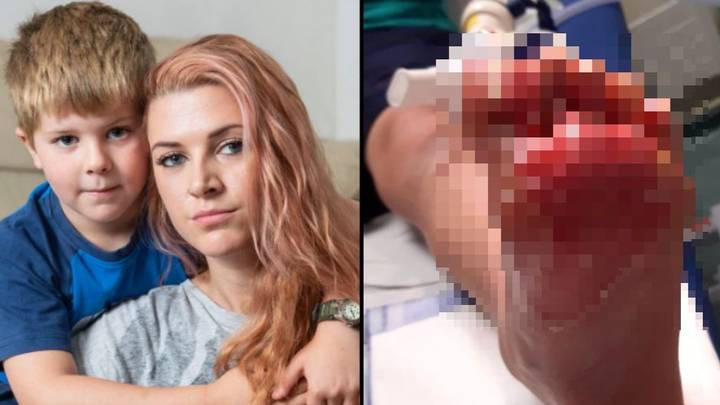 WARNING: GRAPHIC IMAGES: Danny Howard shared “the most excruciating pain” after walking on “absolutely scorching” barbecue sand on the beach

Wales Online reports, ‘Danny Howard, 33, felt “the most excruciating pain” of his life, saying the heat had “melted” his skin’  The sad incident happened at Barmouth Beach in Wales and unfortunately, Danny had to drive two hours to Chester for medical assistance.

He has since been receiving morphine for the pain and is nursing his horrific wound at home said dailystar.co.uk. Danny is spreading awareness of the dangers of disposable barbecues to the people on sandy beaches, particularly if young children are roaming around.

Danny decided to visit the beach with his family to make the most of the good weather conditions. The accident happened after an hour during their trip. Danny said: “We got to the beach, carted a load of stuff over the dunes, and set up a little tent.

“We got a couple of disposable barbecues out, cooked all the food, and I decided to move the barbecues to a bit of a safer distance – but not realizing that the sand had accumulated all the heat of the barbecue. “I stood on the sand where the barbecue was within an hour of being there.”

Speaking about the pain he suffered, Danny added: “On a scale of one to ten, I’d put it at 25.” The barbecue trays were cold by the time when Danny stepped on them, and all the heat was transferred to the sand.

When he reached the hospital, a thick blister was formed. The hot sand had seared through two layers of his skin. After being dressed, he was sent home with ibuprofen and paracetamol. But these medicines couldn’t minimize the unbearable pain that left him with tears. “I had to go back the next day because the pain was excruciating.

“They re-bandaged it and there was thickening, forming a hole in the center. Thickening is what they call a fourth-degree burn.”

8 Tips That Will Help You Sleep Like a Baby