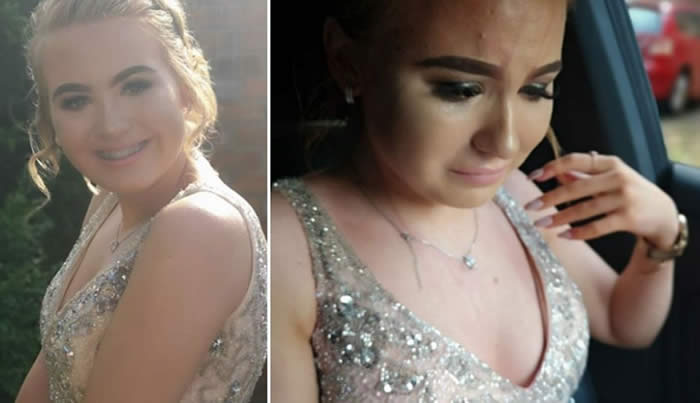 Photos of a teenage girl’s traumatic experience at her prom night have highlighted the challenges of adolescent anxiety and school bullying.

Tracy Perry, from Doncaster, wrote on Facebook she had to beg her daughter Emilee, 16, to go to the school prom last week adding she suffers from anxiety.

Emilee donned a sequin dress and went to the dance, but two hours later her mum had to come and pick her up.

“Two hours later I collect her from the prom like this, heartbroken and in a state,” Ms Perry wrote.

“This ‘person’ thought it a good idea to pour a full jug of juice over her and soak her from head to toe.”

Pictures show Emilee before and after the cruel prank – smiling ahead of her arrival and in tears, soaked with stains on her dress following the drenching.

The pictures were shared more than 1200 times and attracted hundreds of comments.

“Such a beautiful girl and she deserves so much more,” one woman wrote.

Another woman added the prank was “absolutely disgusting” but Emilee “still looks beautiful”.

“This honestly broke my heart,” another woman wrote.

“Your daughter is gorgeous inside and out. I hope something is done about this. It’s disgusting behaviour and it deserves to be punished.”

Others called the bully’s actions, “vindictive and nasty”.
Inspired by the encouragement of strangers

Emilee has since responded to the support she’s received on Facebook.

“The way that people have responded has absolutely overwhelmed me and has proven to me that I can get through everything and it hope that this makes me a stronger person,” she wrote.

“I’m personally making the decision to keep the name of the girl anonymous because I would hate to be spreading her name around and causing her more hate and stress.”