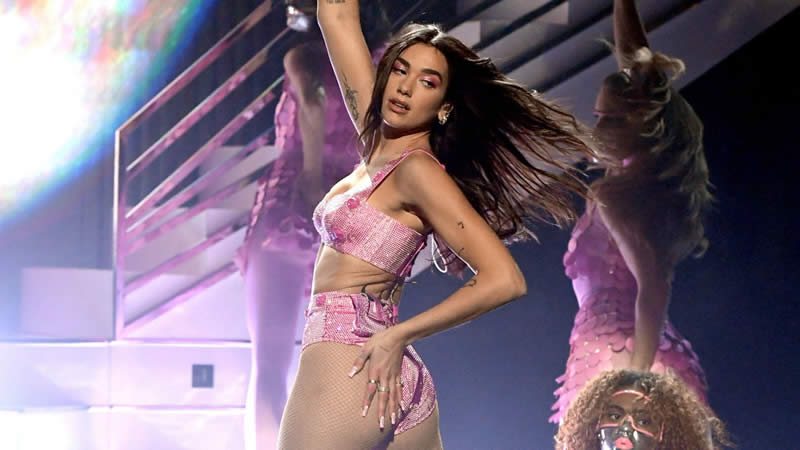 With the release of Future Nostalgia—aka one of THE best pop albums of 2020, feel free to fight me on that—Dua Lipa took her already-infectious pop songs and infused them with instrumentals and melodies reminiscent of the 1970s disco era. Since then, Dua has been getting critical acclaim for how her Future Nostalgia era flawlessly combines the past and present, so when it was time to walk the Grammys red carpet tonight, it made total sense that Dua would pay homage to the biggest singers of the ’70s: The one and only…Cher!

Dua stepped out in a semi-naked gown custom made by Versace that was bejeweled to the nines in pink, blue, and white stones. The look—which, TBH, consists mostly of a bodysuit with a butterfly motif at the bodice—goes completely sheer the skirt, with only a sheer piece of glittering fabric that has a high slit at the leg.

As for Dua’s glam, she kept it simple with a flawless base, frosted purple eyeshadow, and super long hair extensions. The whole look gives off major “Cher looking drop-dead gorgeous at the 1974 Grammys” vibes.

As a reminder, Dua is up for a whopping five awards tonight! Future Nostalgia is a contender in the Album of the Year and Best Pop Vocal Album categories, while her bop, “Don’t Start Now” secured nominations in the Best Pop Solo Performance, Record of the Year and Song of the Year categories.