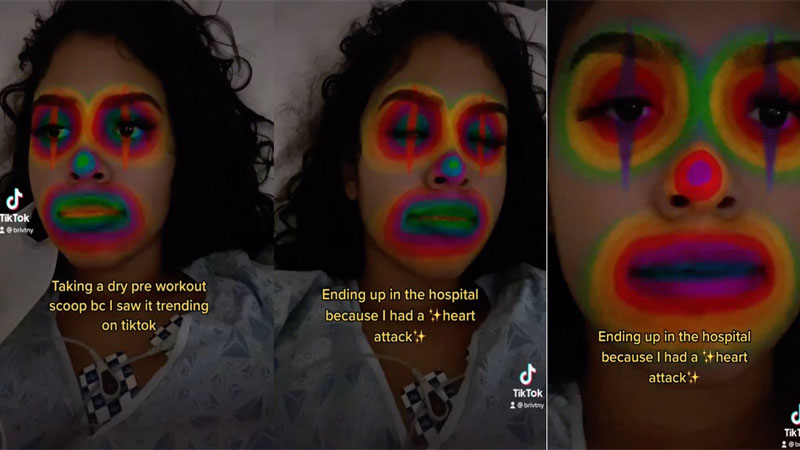 A lady, 20-years-old claimed that she was about to experience a heart attack while doing the so-called “dry scooping” challenge.  Briatney Portillo, known on TikTok and Instagram as @brivtny, warns the others to be cautious while trying this challenge.

“Putting this out there so y’all don’t do what I did because I’m the type of person to try anything and everything I see here w/o questioning it,” Portillo said in a clip.

“Dry-scooping,” is a challenge of dumping dry pre-workout supplements or protein powders into one’s mouth instead of diluting them with water.

In the last few months, some people made videos on TikTok, when experts warned could result in a problematically concentrated amount of caffeine being consumed rapidly.

Portillo also runs an OnlyFans page expressed her views and accused those people who were accusing her of fabricating the heart attack story. She also revealed the specific powder she says she used for the challenge, naming it as a Redcon1 Total War pre-workout supplement, and fielded questions about what symptoms inspired her to see a medical professional.

“Symptoms in particular that made me go to the ER were, when the pain in my chest went to my left side and my left arm went kind of limp,” she said. “That’s when I knew it wasn’t anxiety and it was actually like a heart attack or I thought, maybe, and I was right.”

Last week, Portillo give an interview with Daniella Emanuel for BuzzFeed News,  providing more vision on the experience, saying she first started to feel “tingly and itchy,” but found out that was a typical side effect and proceeded to go ahead with her planned workout. She then felt a heaviness in her chest with slight pain, assuming it was anxiety or a panic attack.

According to Portillo, she felt better after taking a shower and decided to head to work. In the locker room of her place of employment, where Portillo works as a dancer, she began to feel hot and started profusely sweating. At this point, Portillo said the chest pain returned with greater intensity.

A hospital visit resulted in the revelation that Portillo’s troponin levels were measuring at a higher-than-normal rate. She was kept overnight by hospital staff, followed by a round of additional tests the following day. Ultimately, the hospital concluded that she had experienced an NSTEMI, i.e. a type of heart attack that typically does less damage to one’s heart, as per complex.com.

Well! the “dry scooping” trend is way too dangerous than one can expect.

Winston Marshall taking break from Mumford and Sons after backlash