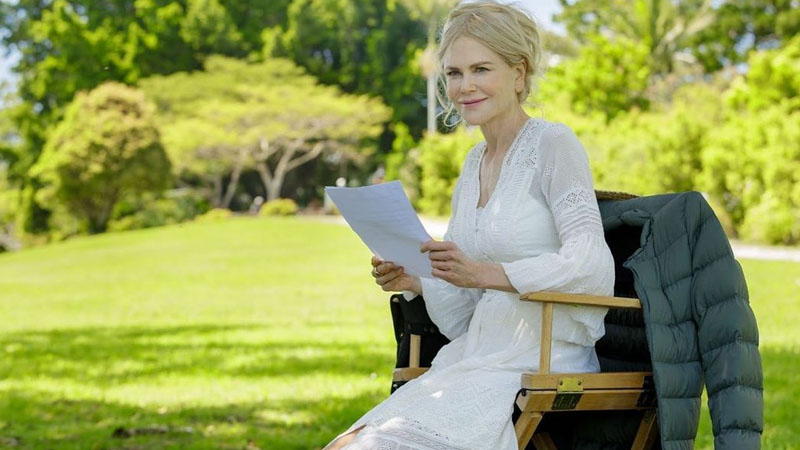 Nicole Kidman, who is married to Keith Urban, appeared to be a princess in a stunning white outfit on the set of Nine Perfect Strangers as she teased the debut of the Hulu miniseries.

The Acclaimed actress is getting fans excited about her latest project, Nine Perfect Strangers, a miniseries coming to Hulu on August 18.

Keith Urban’s wife shares the latest snaps on Instagram Thursday, showing her sitting in a chair at a lush green bit of land with a script.

She captioned the post: ‘Let the countdown begin! 2 weeks’

In the pictures, she looks out of this world. Her blonde hair is clipped back as a couple of strands delicately fall on the side of her face, rocking a white dress with a button-up bodice and a v-shaped neckline.

Nicole Kidman is seen smiling in one photo and looking intently at a script in the other. A puffy, green jacket is draped on the back of the chair the award-winning actress is sitting in.

Nicole Mary Kidman is an Australian-American actress, producer, and singer. She has received numerous accolades throughout her career, including two Primetime Emmy Awards, five Golden Globe Awards, and an Academy Award from four nominations.

Keep Motivated with Your Fitness Routine with These 5 Tips

Hillary Looks Annoyed, as Bill Showing Off His Flirtatious Side