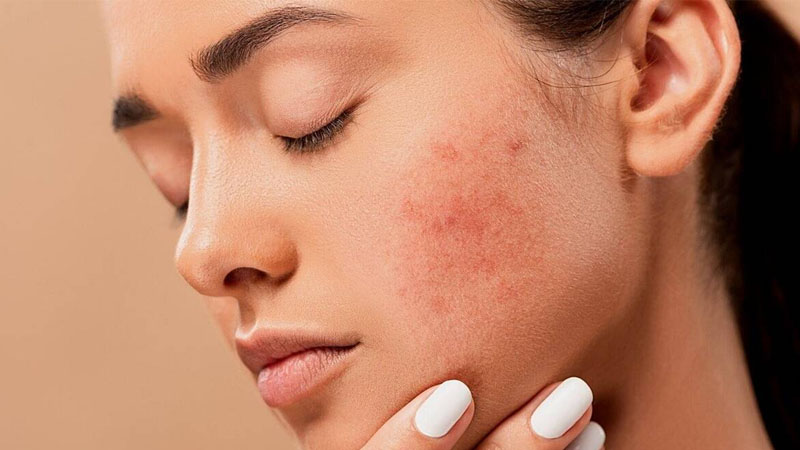 Acne Rosacea is a common human skin disease found especially in white-skinned people. It is called acne as it looks like it but is not the same. Initially, it erupts just like acne but the symptoms are different. It affects the face and chest.

Here are some of the symptoms of acne Rosacea.

This is the first symptom of acne rosacea. It might occur at the adolescent age but mostly it occurs at a later stage in life and it might not go for a very long period. Generally, dermatologists do not give any medication for such a blush-like redness, unless it gets septic or gets very irritating.

2. Formation of cyst or pimples

Puss-filled cysts or pimples occur on the face and they do not budge even after the basic treatment of gels and facial creams. These cysts increase if they are crushed with fingers and there is an increase in the redness on the face. Such cysts and pimples have nothing to do with age. They can occur even if the person is in his/her 40s.

3. Fine broken veins on the face

Our face has many thin fine veins called capillaries. They are present under the layers of the skin. If these capillaries start coming on the cheeks and can be seen very prominently under the thin layer of the facial skin, then it is a symptom of acne rosacea. These increase in number eventually and one has to visit a dermatologist or a doctor to get treatment.

4. Thickening of the skin

This is an advanced symptom of acne rosacea. The portion of the skin that has gone red and irritant, starts becoming thick. There is a visible inflammation on the surface of the skin and it can also get itchy. This is irrespective of oily or dry skin. Patients suffering from this also might have excessive growth of skin mites. In this situation, doctors suggest antibiotics along with facial creams and gels for the treatment.

5. Redness in the eyes, chest, and neck

Another major advanced symptom of acne rosacea is the spreading of acne on the neck, chest, and also the eyes. Large broken capillaries can be seen on the neck and chest and your eyes will also get irritant. If it gets itchy, it is difficult to control. It can also be followed by painful puss-filled cysts. Once it spreads to the neck and chest, it becomes difficult to cure acne rosacea.

7 Tips on How to Get Rid of Crows Feet