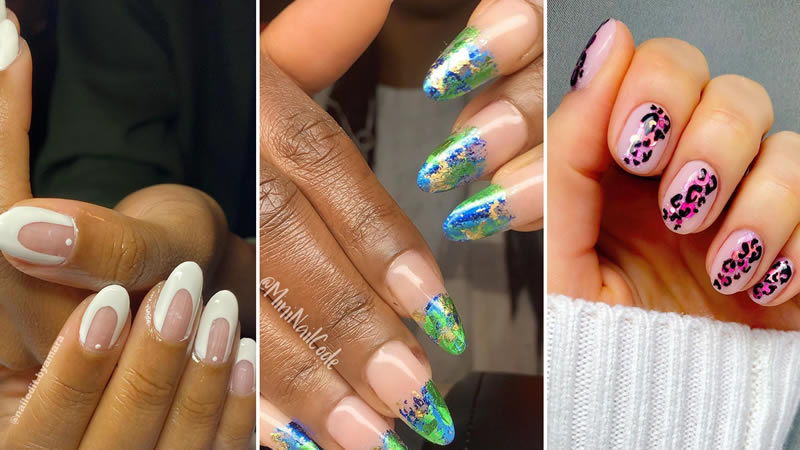 Most of us spent our lockdowns baking, crafting or watching TV, but one woman found another way to pass the time.

Tara Aleck decided to use the extra hours to recreate famous paintings… on her nails.

The 34-year-old had never previously been interested in nail art until she started working from home last year. She then started experimenting on her talons and posting the results online.

Some of her impressive works include nail-sized versions of well-known paintings, such as Vincent van Gogh’s Starry Night, Edvard Munch’s The Scream and René Magritte’s The Son of Man.

These intricate designs can take her up to six hours to complete.

Tara told Jam Press: ‘I was completely alone and felt so isolated and incredibly bored when lockdown started.

‘I wanted a creative outlet to pass the time but was limited by what materials I could easily get hold of.

‘Chemists were open so I realised I could get nail varnish and it all went from there.

‘It was a case of working out what I was able to do and what I wasn’t – it was a lot of trial and error.

‘I realised what kind of images I could create well and surprised myself.’

Tara also creates natural scenes – some of which echo pieces by the late TV painter Bob Ross – including mountain landscapes and forest settings.

She updates her nails every week and has even started taking requests from friends and followers when she’s running low on inspiration.

Tara added: ‘The hardest thing is thinking of something new to put on my nails each week.

‘Usually as soon as I’ve done them I’ll start thinking about what to do next because it can take forever to think of something.

‘I can be a bit of a perfectionist and very critical of myself, but what I love about nail art is that it’s only there for a few days.

‘It doesn’t have to be perfect because it won’t be there forever, which is quite liberating to someone like me.’

Tara now hopes her nail art will reach celebrities, to raise awareness of the issues she’s passionate about.

She said: ‘A couple of months ago I saw on social media that Ronnie O’Sullivan had played a televised snooker match with his nails painted to raise awareness of breast cancer.

‘It occurred to me that in the future it would be brilliant to work with celebrities and people with high profiles to do nail art for them to raise awareness for social issues I care about.

‘Keanu Reeves would be my dream celebrity to work with.’

People Are Reporting Unexpected Side Effects After COVID-19 Vaccination

The Best Foods To Eat For Natural Probiotics

How to make 70s beauty look modern for spring 2021

4 Reasons Why Cellulite can not be Treated