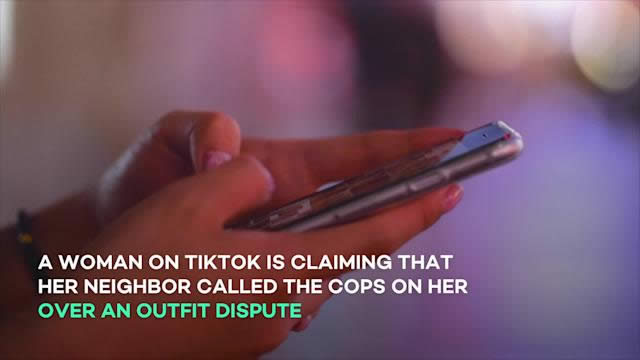 A woman on TikTok is claiming that her neighbor called the cops on her over an outfit dispute.

“Yesterday my neighbor called the cops on me for dressing ‘inappropriately,’” user @rovi_wade captioned her video explaining the incident. While the police officers in question are not shown on camera, voices can be heard off-camera.

Enter here for a chance to win a $500 Winky Lux prize package.

“I am fully dressed, she just doesn’t like my style,” @rovi_wade says in the clip. “I told her, ‘My body offends you, that’s what the issue is.’”

In the TikTok, @rovi_wade is wearing a spiked collar and a top with thin spaghetti straps. Although she is outside, it’s not clear whether she’s in a public place or in her private backyard. In a follow-up video, @rovi_wade revealed her full outfit was simply was a crop top and denim shorts.

“I’m allowed to exist and be hot,” she explains in the second video. “I’m going to continue to do so. I don’t know what she expects you to do.”

The TikToker’s insistence claim to the police that she’s “allowed to exist and be hot” has riled up viewers who dubbed her a “global icon.”

Most commenters on TikTok seemed astonished that the neighbor would call 911 over someone’s outfit.

“I genuinely want to know what she thought the cops were gonna do,” one user commented.

“That woman needs to be charged,” another added, referring to the neighbor. “God knows how many she’s endangered.”

The perfect vitamins for your everyday life.

How to make 70s beauty look modern for spring 2021

Here’s what we know about traveling with unvaccinated kids

Biden In ‘Regular’ Contact With Obama To ‘Consult And Talk About A Range Of Issues’: WH Official