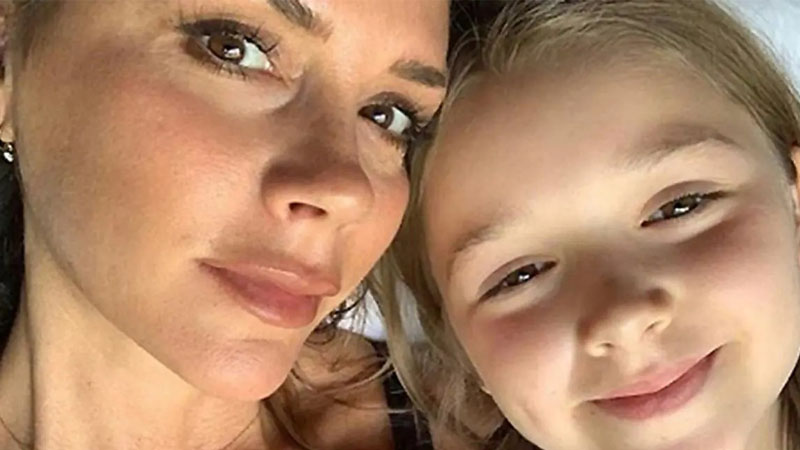 The former Spice Girl shared a selfie from their bed on her Instagram Stories. She also applied a filter to Harper’s face that added sparkling smiley face stickers. The 47-year-old adorned the corner of her story with a few heart stickers.

Posh Spice, who has three children with footballer husband David, Brooklyn, 22, Romeo, 18, and Cruz, 16, uploaded a photo of their day out, over the weekend. Victoria wore a plain black t-shirt and took the picture from a high angle.

She captioned the photo, “Girls’ night out,” and tagged Strawberry Moon at The Goodtime Hotel. The hotel is located in the middle of Miami, where the Beckhams are rumored to be vacationing.

Harper was most recently on a trip to Italy with her father David, brother Cruz, and grandmother Sandra – as the source says. The family was photographed soaking in the sun while on a boat trip in Nerano.

Victoria, as well as the couple’s eldest kids Brooklyn and Romeo, were not present. Only a few days prior, it was claimed that police investigators interrogated the footballing icon over his children’s use of jet skis before spending 45 minutes conversing with the sports star.

To ride a jet ski in Italy, a person must be over the age of 18 and have a boat license, prompting police to approach alongside the yacht. As stated by Mirror, Cruz and Harper, who were both wearing life jackets, had just been on the jet-skis for a few minutes when the police boat pulled up, according to a witness.

An observer told The Sun that his communication with the officers appeared to be friendly. “Both Cruz and Harper were wearing life-jackets and staying very near the yacht so it is hard to see what the problem was.

“David seemed to call to them to come back to the yacht, and they anchored the jet-ski. The questioning by the police went on for about 45 minutes although it all looked quite amicable.

“At one point, they asked for documents which David showed them. During the questioning, the police recognized David and seemed to chat to him.”

The officers were said to have even asked the icon for a selfie before going and allowing the family to enjoy the rest of their sunny vacation.