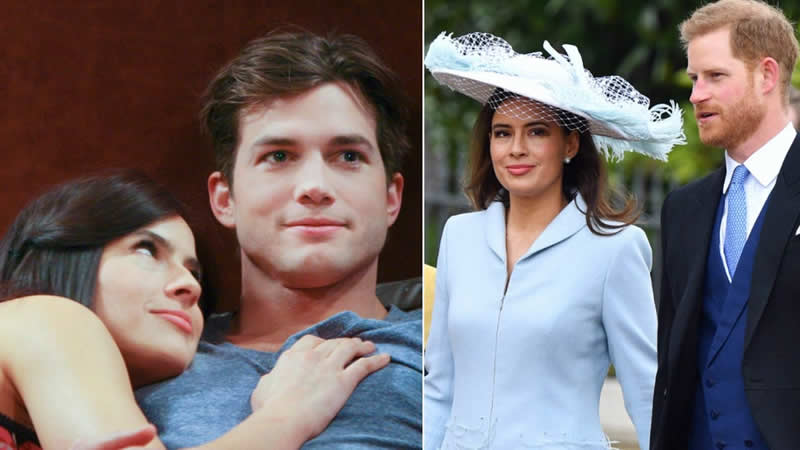 Sophie Winkleman became a member of the British royal family upon her marriage to Lord Frederick Windsor, the son of Queen Elizabeth’s first cousin Prince Michael, in 2009.

The day after the ceremony, the couple left royal life behind for LA. It was there that Winkleman kickstarted her Hollywood career, landing a role opposite Ashton Kutcher in “Two and a Half Men” in 2011.

The actress and activist told Insider that she was able to keep her royal identity secret throughout her time in the industry.

Winkleman says nobody knew she was a member of the British royal family because she didn’t take the royals’ last name
Winkleman played Zoey, the love interest of Walden (Ashton Kutcher) in the ninth and 10th seasons of “Two and a Half Men.”

The royal had a long-standing acting career before she ever stepped foot in Hollywood, having performed both in theater and films in the UK.

It was for this reason that Winkleman decided to keep her maiden name when she married into the royal family in 2009.

She told Insider that while she considered changing her name to Windsor because it is “rather elegant,” she ultimately decided against it because she was known in the industry as Winkleman.

The actress is formally known as Sophie, Lady Frederick Windsor, however, she didn’t use this title during her time in Hollywood – which meant most of her colleagues had no idea who she was.

“People in my business in America didn’t know anything about it, because they’d just see Sophie Winkleman on the sheet and I’d go and do the audition and then get the job or not,” Winkleman said. “And they didn’t find anything out about me. They just knew me from my acting, which was quite important to me.”

Winkleman has fond memories working with Kutcher on “Two and a Half Men,” which aired its final episode in 2015. She said the actor was “a delight, and very clever” and would spend his breaks deciding which businesses to invest in.

Winkleman uses her royal status to raise awareness of causes she is passionate about
Winkleman and Lord Frederick moved back to London in 2013 to be closer to the family, who the actress described as positive and caring.

“I can only speak from personal experience, but when I first went to Buckingham Palace to meet the Queen for the Christmas lunch, she was incredibly welcoming and kind,” Winkleman said. “I’ve only had positive, caring, warmth from all of them.”

The couple have two daughters, Maud (7) and Isabella (5). Winkleman balances her time between motherhood, acting, and her various royal patronages, including School-Home Support (SHS).

Winkleman says that while she still uses her maiden name for her acting projects, she’s happy to use her platform as a royal to raise awareness of the work SHS is doing.

The charity aims to tackle the issues affecting children’s learning, such as poverty, inadequate housing, and mental health. SHS has various methods of helping families in need, from providing food vouchers and free school meals to delivering equipment for online learning.

Demand for the charity’s service quadrupled during the UK’s first lockdown last year, according to the SHS website.

“There’s an immense level of deprivation in the UK. Children have been the main victims of the past year, and obviously their parents have been at a very high tension point because of financial worries, food worries, heating worries, and job worries,” Winkleman said. “And when parents’ tension goes up, the child is usually the scapegoat – and the violence that’s going on hasn’t really been talked about enough.”

Winkleman says the charity has taken on a “safeguarding” role during the pandemic, ensuring children who are living in disadvantaged or violent homes are being cared for.

“I feel that all babies are born the same. And I think if we don’t fight for the ones in tough circumstances, we’re not a society worth talking about,” she added.

Prince William and Kate Middleton’s favourite car is for sale!

Prince Philip mad or not over Prince Harry’s damaging interviews?