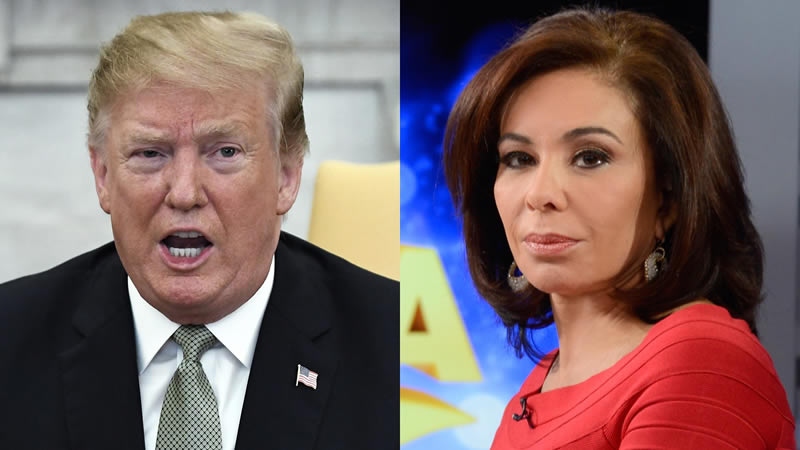 In his interview with Fox New’s Judge Jeanine, Trump called out Biden for not finishing “the wall” and stated that the remain in Mexico policy must be reenacted too.

He also confirmed that he will be visiting the Souther Border within the next few weeks.

That wasn’t it though, he also called out Biden for being weak on North Korea and China.

Check out a clip from his interview here:

“A lot of people want me to” visit the border, Trump told Pirro.

In the interview, Trump said he would probably visit the southern border over the next few weeks.

Trump called President Biden’s undoing of the “Remain in Mexico” policy, or the Migrant Protection Protocol, a “very bad decision.”

The Trump administration set up and expanded MPP during the 2019 migrant crisis as part of a broader agreement with Mexico, and hailed it as a key plank in its efforts to end “catch-and-release” — by which migrants were released into the interior of the U.S.

Instead, MPP keeps migrants in Mexico as they await their asylum hearings. Proponents say the policy ended a key pull factor that brought migrants north, while critics say it is cruel and puts migrants in danger by leaving them in Mexico.

“Thousands and thousands of people are coming up right now as we speak. And you’re going to have millions of people pouring into our country. And it’s going to destroy our country,” Trump told Pirro.

The GatewayPundit covered the story too:

President Trump says he will travel to the U.S. border with Mexico “over the next couple of weeks.” Trump made the announcement Saturday night on the Fox News Channel program Justice with Judge Jeanine Pirro, saying that Border Patrol and ICE have been asking him to come to the border.

Trump: “Well, a lot of people want me to. The Border Patrols and all of the people of ICE, want me there, they’ve asked me to go and I really sort of feel I owe it to them, they’re great people, they’re doing an incredible job…I’d love not to be involved. Somebody else is supposed to be doing it.”

Woods serves up laugh ahead of Masters Champions Dinner