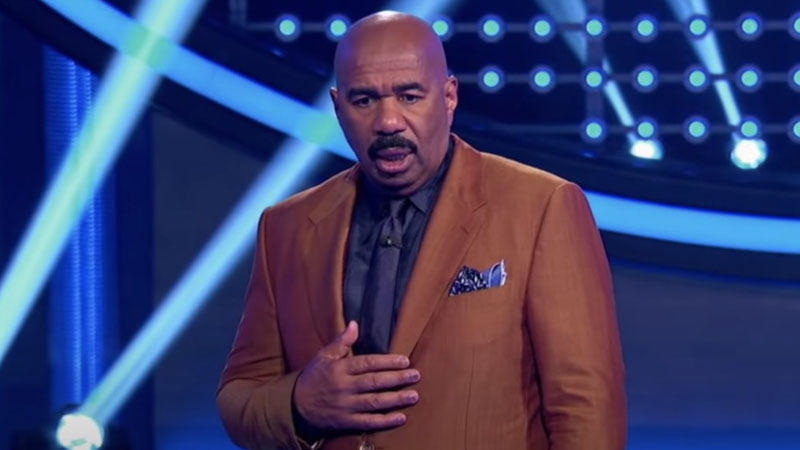 Steve Harvey has been on television since 1993. One tabloid claimed in a past story that the comedian was furious with Kelly Clarkson and her then-new talk show for taking his time slot. “Kelly Clarkson stole his prized time slot,” the Globe wrote back in 2019 about beloved talk show and Family Feud host Harvey.

“Steve’s blood is boiling over this. He’s been in the game for a long time, and now Kelly is walking in and stealing his slot from right under his nose,” an unnamed insider source said about Harvey. They also claim Clarkson didn’t have enough experience hosting to boot him out of his show. “Kelly doesn’t have the same kind of experience as Steve, and he won’t let anyone forget it. He’s set on getting both Kelly and the network back for this!”

Both celebrities had shows on NBCUniversal, though the outlet speculated Harvey may leave the company to shop Steve around to other platforms and networks. “Steve is hoping Kelly’s show will tank, and he’ll trash talk her to anyone who will listen. In Steve’s mind he’s been totally screwed over by the network and it’s all because of Kelly,” the source said.

Two years out from when this story first published and a lot has changed for both Clarkson and Harvey. Clarkson had one of the best daytime talk show premieres of all time is set to take Ellen DeGeneres’s slot in 2022. Harvey is still hosting Family Feud and even signed on to host the South African version of the show, which just launched its second season.

Harvey could have been bitter about losing his slot, but unnamed sources wouldn’t know the truth. He did end up getting his show back, this time on Facebook Watch. Steve on Watch had its first season during the pandemic but will return with a studio audience soon, Deadline reports.

“I’m looking forward to the next season of Steve on Watch,” Harvey explained. “Connection has played an important role in our lives over the past year and Facebook Watch is a great place to share stories and connect with fans on a global level. No show is ever the same and nothing makes me happier than sharing my take on things.”

The Globe and its fellow tabloid publications get it wrong about Harvey and Clarkson constantly. The magazine claimed in April that Clarkson was feuding with another person, this time Blake Shelton. She was apparently even leaving The Voice over it. The Globe’s sister outlet, the National Enquirer, loves to tease us with the end of Harvey’s career.

Last October, Harvey was allegedly at risk of losing his Family Feud gig due to FCC complaints. Another story said Harvey flat-out quit Hollywood. As you can tell, Clarkson is still on The Voice and Harvey is still very much on TV, so there’s no reason to trust these reports.

The Most Terrifying Killer Admires Lady D’ As Jesus