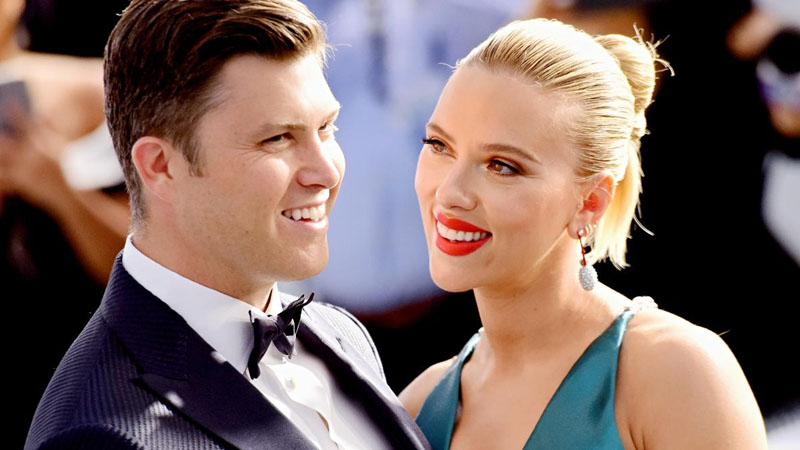 While we’re just days away from Black Widow releasing in US theatres, there is some exciting news about Scarlett Johansson, 36, this week! According to a report by Page Six, through multiple sources, the Avengers: Endgame star is pregnant and expecting her first child with husband Colin Jost, 39.

It’s interesting to note that the pregnancy rumors sparked in June after Scarlett skipped out on several Black Widow events, not doing many interviews or events to promote the MCU movie. Why this is surprising, according to a source, is because of the magnitude of such a big Marvel/Disney release along with the fact that “she is both the star and an executive producer.”

Instead, Johansson has relied on sporadic promotional appearances via Zoom with a recent example being her The Tonight Show Starring Jimmy Fallon virtual appearance on June 21, where her video was conspicuously only shot from the shoulders up.

There have been several Black Widow events thrown by Disney in New York, Los Angeles, and London with Florence Pugh and David Harbour in attendance and heavily promoting the MCU film but ScarJo has been MIA from all of them.

There was a Black Widow screening in Hamptons on Friday, July 2, attended by David, followed by a party at Mariska Hargitay’s home, which was close by to Scarlett and Colin’s Montauk home, where the couple is frequently seen out and about.

A Hamptons source informed, “Scarlett usually spends a lot of the summer out in Amagansett and Montauk, and you’d often see her walking her dogs on the beach or getting coffee. But this summer it seems like she is deliberately trying to keep a low profile.”

While Scarlett is gearing up to embrace motherhood, it will be Johansson’s second child as she previously welcomed daughter Rose Dauriac, 6, with ex-husband Romain Dauriac.

Prince Harry Leaves UK But Not For Long, Next Time He Might Take Meghan With Him, Report Claims

Kendall Jenner Is In So Much Trouble After Posting This Photo–What Was She Thinking?!