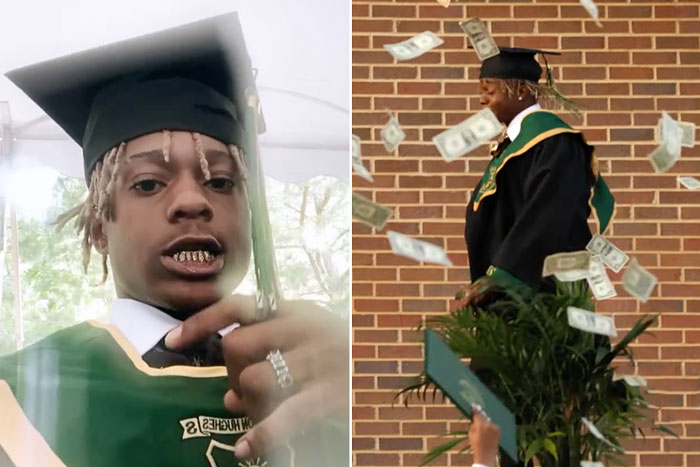 Quality Control artists like Lil Yachty, Lil Baby, and Migos have become known for major flexes, but one of their labelmate’s stunts landed him in some hot water.

In video footage that has been making its rounds on social media, Metro was handcuffed after reportedly throwing $10,000 in cash on stage at his commencement ceremony at his school in Fairburn, Georgia, about 25 minutes away from Atlanta.

In a nearly minute-long clip, Metro is seen being detained by officers who are presumed to be from the Fulton County Schools Police Department. A male voice is heard saying, “At the graduation.”

The man then yells for Metro to hand over a large wad of cash as one of the arresting officers instructs the 18-year-old rapper, born Marques Smith, to do the same.

The same officer then informs the man behind the camera that Metro will not be marching out of the ceremony with the graduating class. The man obliges while people start chanting, “Let him go,” which can be heard from the crowd of graduates.

As expected, his peers went wild. While they were scrambling to catch the cash, Marrs was grabbed and escorted from the outdoor graduation by on-sight police officers.

He was reportedly detained and hit with a charge for inciting the riot. After spending a few hours in the precinct, Marrs was released and will be subjected to a fined ticket.