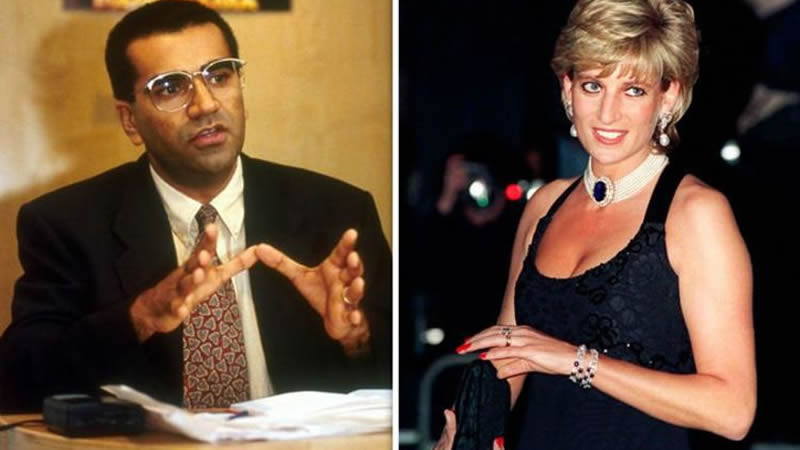 The mocked-up bank statements are at the heart of an inquiry led by Lord Dyson, the Master of the Rolls, into the conduct of Bashir in securing his world-exclusive interview with the princess in 1995.

Lord Dyson has completed his detailed report, due to be published this week and expected to contain damning criticism of Bashir, 58, who resigned as the BBC’s religion editor on grounds of ill-health ahead of its publication.

The bank statements showed fake payments from a tabloid newspaper and from an offshore company totalling £10,500 going into a bank account of a company owned by the former head of security of Earl Spencer, Princess Diana’s brother.

Bashir is accused of using the false statements to gain Earl Spencer’s trust and persuade him to introduce the journalist to his sister.

Princess Diana went on to give the famous interview to Bashir for the BBC’s Panorama in which she declared that “there were three of us in this marriage” in reference to Prince Charles’s affair with Camilla Parker-Bowles.

Bashir showed mocked-up bank statements to Diana’s brother
The Telegraph now understands that Bashir defended the use of the mocked-up statements by insisting he only did it after being given the information by Princess Diana. He has told Lord Dyson she was the source of the claims that payments were made into the account of Alan Waller, Earl Spencer’s former head of security.

Bashir approached a freelance graphics artist who worked for the BBC and requested he mock up bank statements showing the payments. The statements were later shown to Earl Spencer. Princess Diana, according to Bashir, later withdrew claims about the payments and there is no suggestion Mr Waller was receiving such payments.

It would be impossible for all the information to have come from Princess Diana since one of the companies alleged to have made payments to Waller was an obscure offshore business with which only Bashir was familiar as a result of a previous unrelated investigation he had carried out for Panorama.

Mocking up was ‘common practice at Panorama’
Bashir is understood to have told Lord Dyson that he mocked up the statements because it was a common practice for Panorama journalists at the time and that they were useful to keep in a file for any future investigation.

Lord Dyson is investigating whether the statements and other methods deployed by Bashir were instrumental in securing the Diana interview.

Only when the Dyson report is published will it be clear to what extent the retired judge has given weight to Bashir’s version of events. His reputation burgeoned after the Diana interview and he left the BBC to pursue lucrative careers first at ITV and then in the US before returning to the corporation.

The furore over the Diana interview erupted six months ago on the 25th anniversary, derailing Bashir’s career and leaving his reputation in tatters. He was struck down with Covid last year and then underwent a quadruple heart bypass. He has since undergone a further heart operation this year and is unlikely to work again.

Bashir has not spoken publicly because of his ill-health but is understood to have mounted a vigorous defence of his actions when interviewed by Lord Dyson.

Mr Waller has denied ever receiving the payments and told The Telegraph last year in his only interview: “This man [Bashir] has become a multi-millionaire by using me. I am the fall guy.

“Bashir has effectively stolen my identity; stolen my banking information and then used it to frame me as the fall guy. That is exactly what he has done. He has framed me thinking I would never find out. It has had a devastating effect on me.”