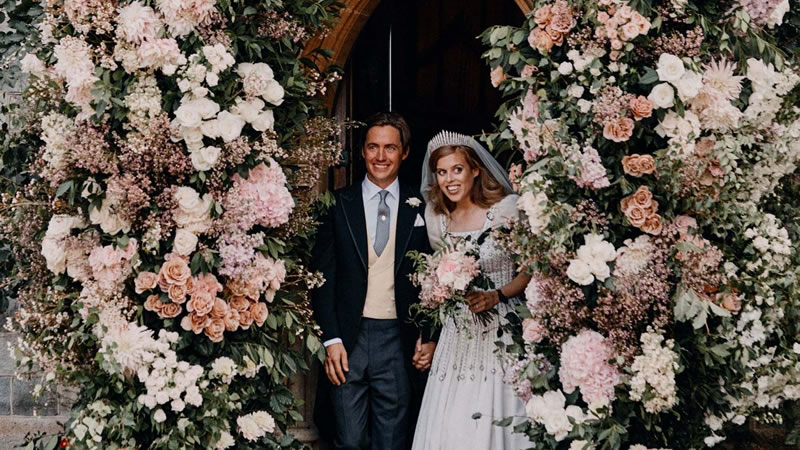 The 31-year-old married Edoardo Mapelli Mozzi in a secret ceremony in front of the Queen and Prince Philip on Friday.

In a statement, Buckingham Palace confirmed that the couple wed on Friday 17 July surrounded by their loved ones at All Saints Chapel in Windsor Great Park, while adhering to strict social distancing guidelines.

Around 20 guests attended the service, including Beatrice’s parents Prince Andrew and the Duchess of York.

Now, it has been revealed that the Princess’s bouquet contained a special selection of flowers chosen by the bride and groom that is in keeping with a royal tradition.

Sprigs of myrtle were carried by Princess Victoria, the eldest child of Queen Victoria and Prince Albert, when she married Prince Frederick of Prussia in 1858.

Since then, carrying sprigs of myrtle in the bridal bouquet has been a regal tradition.

Princess Beatrice’s bouquet was designed by Patrice Van Helden Oakes, who was also the florist behind Beatrice’s sister Eugenie’s bouquet for her wedding in 2018 and whose brother is floral designer Rob Van Helden.

Mr Van Helden explained that both Mr Mapelli Mozzi and Princess Beatrice were involved in designing the bouquet and wanted to include both of their favourite flowers: Norma Jane roses and sweet avalanche pink roses, respectively.

“They wanted to keep it natural, with dusky pink roses, British flowers and a vintage look,” Mr Van Helden added.

“It has been a huge honour and privilege to be part of this special and magical day.

“They are friends of ours, and my sister and I are both blown away by the reaction we’ve had.”

Many other royal weddings have featured sprigs of myrtle in the bouquets.

The Duchess of Sussex, the Duchess of Cambridge, the Queen, Diana, Princess of Wales, Princess Eugenie and her mother Sarah, Duchess of York each had myrtle in their bouquets on their wedding day.