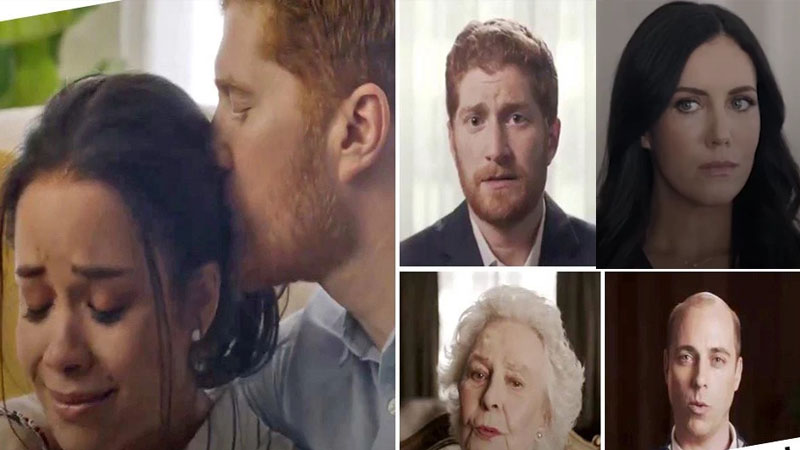 The third teaser of the movie has now been released, and it kicks off with Prince Harry (Jordan Dean) claiming, “I will do anything in my power to keep my wife and son safe.”

The newidea stated that Queue a bunch of soundbites from key members of the monarchy and, as they look directly to the camera, we can’t help but be reminded of those dramatic reality TV interviews. You know, like on The Bachelor when a contestant explains some mansion drama to the producers.

“This is the life we signed up for, we value dignity above all else,” Kate Middleton (Laura Mitchell) says. “I never thought this would be easy, but I wanted to make the Queen proud,” Meghan Markle (Sydney Morton) explains. “Let everyone understand it, the monarchy is at stake,” Prince William (Jordan Whalen) dramatically surmises.

“The monarchy will always survive,” the Queen (Maggie Sullivan) contradicts.  Bonnie Soper as Princess Diana also appears in a guest appearance in the movie, which ends with Meghan telling, “Have I made the world’s biggest mistake?” Making judgments by the teaser reactions of Lifetime’s Instagram comments, while the real Meghan appears flawlessly content with her choices, this movie may be up there on the fault front.

“This shouldn’t have been produced. Talk about adding fuel to the fire,” one user wrote. “And I will do everything in my Power not to watch,” another penned. A claim made on Saturday Night Live: “Lol looks like an SNL skit. Get over it. No one cares about cringe and ging.” There were however some, albeit drastically fewer, comments of support for the film, which has no release date as of it.

The teaser criticised a lot but apparently, the release of the movie has no release date confirmed yet. “We don’t think it will be at The Crown by Netflix”, said fashioncentraluk.