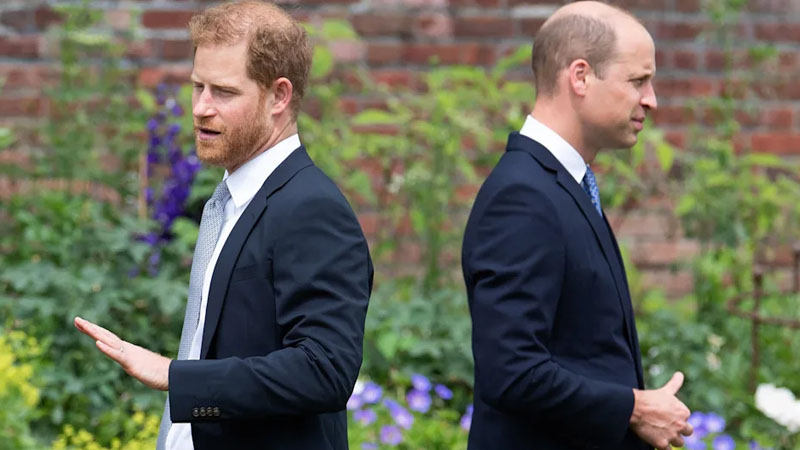 Prince Harry, 36, didn’t hang around for long after reuniting with his brother, Prince William to unveil a statue of their late mother, Princess Diana, outside Kensington Palace on Thursday.

The US-based duke — who flew in especially for the event to mark Diana’s 60th birthday — reportedly arrived at the palace’s Sunken Garden by chauffeur-driven car 30 minutes before the ceremony began.

After making his way to the public garden, where the statue awaited under a green silk cloth, sources say Harry was greeted first by James Holt, a former Kensington Palace staffer who now heads up the Sussexes’ Archewell Foundation.

Then, he was joined by his brother Will, 39, and the men appeared to put on a united front despite their royal ‘rift’ playing out over the past few years.

The duo hasn’t been pictured together since their grandfather Prince Philip’s funeral in April. The sad event brought them together for the first time since Harry and his wife, Meghan Markle, stepped back from the royal family and relocated to the US in early 2020.

But the brothers weren’t alone and instead had their long-time right-hand man, Jamie Lowther-Pinkerton, by their side to diffuse any tension.

Lowther-Pinkerton, who was the chairman of the small statue committee, could be heard laughing with the pair, setting a relaxed tone for the event.

Rounding out the small, intimate ceremony were Princess Diana’s siblings, Lady Sarah McCorquodale, Lady Jane Fellowes and Charles, the 9th Earl Spencer all of whom Harry and Will welcomed warmly.

After some chit-chat, Harry and William each took a side of the green cover, and William said ‘ready’ before they pulled it down to reveal the statue amid applause.

Prince Harry was pictured grinning and looking relaxed, while Prince William spent more time inspecting the statue of his mother which was designed by artist Ian Rank-Broadley.

According to reports by the Daily Mail, after admiring the statue the group retired to the outside terrace of the Kensington Palace Pavilion for refreshments at around 2.45pm (local time).

But by 3.05 pm, Prince Harry is said to have already made his excuses and left the party after just 20 minutes and ‘one polite drink’.

Prince Harry’s relationship with William and his family has been fraught for months now, with the royal telling Oprah Winfrey in their now-famous interview back in March that he needed ‘space’ from his big brother.

“I love him to bits,” Harry told Oprah.

“He’s my brother, we’ve been through hell together. And we have a shared experience. But we, you know, we have different paths.”

Both Harry and Meghan, 39, made a series of claims against the royal family including alleging a family member made racist remarks about the color of their then-unborn son Archie’s skin tone.

Meghan also countered widely reported claims that she made her sister-in-law Kate Middleton cry before her 2018 wedding to Harry, saying that it was the reverse that had happened.

When the prince rushed home to the UK from California when his grandfather died in April, many were hoping the family would reunite in grief however the relationship remains strained.