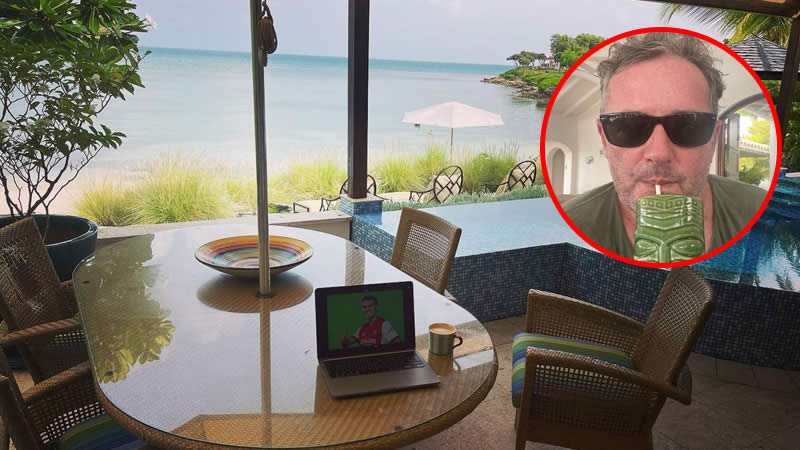 Piers Morgan has given followers a glimpse of the stunning Caribbean villa he’s staying in, while his wife Celia Walden appears to have remained in the United Kingdom. The 56-year-old is on vacation along with his three kids from ex-wife Marion Shalloe: Spencer, 28, Stanley, 24, and Bertie, 20.

Piers Morgan has been having a great time in Antigua the last few days. With his photos and films, the outspoken journalist has made his wife Celia Walden envious.

While he is in the Caribbean, the presenter’s other half, 45, appears to have remained in the UK.
Piers’ amazing accommodation and jaw-dropping view were disclosed via Instagram, where he has 1.7 million followers.

Piers pans the camera around the beachside residence as he stands close to the infinity pool in the sunny clip.

The mild breeze could be heard and the ocean looked crystal clear while he and his kids stayed out of sight.

Piers simply captioned it “Morning!”, garnering nearly 20,000 views and a slew of comments.

One user remarked, “Wow! Just beautiful. How did you find this beauty!?”

Celia, on the other hand, appears to be missing out on the holiday.

She also shared a glimpse of her weekend with her 45,000 followers today, but the scene was much different.

Before gathering unwanted swans, the writer had a pedalo ride in what appeared to be a London Park.
The actress wrote in the caption of her Instagram post:

After pairing jeans with pale blue sneakers, Celia’s legs were only visible in the tiny vessel.
It’s unclear why she isn’t vacationing with Piers, whom she married in 2010.

Elise, their nine-year-old daughter, is the couple’s child. It may be connected to Celia’s big career moment, which includes the release of her debut thriller.

As per Express, Payday is due to hit shelves on 2nd September, and she’ll most certainly have a lot on her plate.

She wrote earlier this week, “Two weeks to go… For signed copies go to the link in my bio.”
Piers has been posting regularly since arriving in sunnier climes five days ago.

“This may have to become my permanent office,” he joked of the beautiful terrace, and Celia quickly liked the post.

Beyonce wears more than 60 designer outfits in ‘Black is King’

Kim Kardashian Wants a Baby But ‘Doctors Have Told Her No’