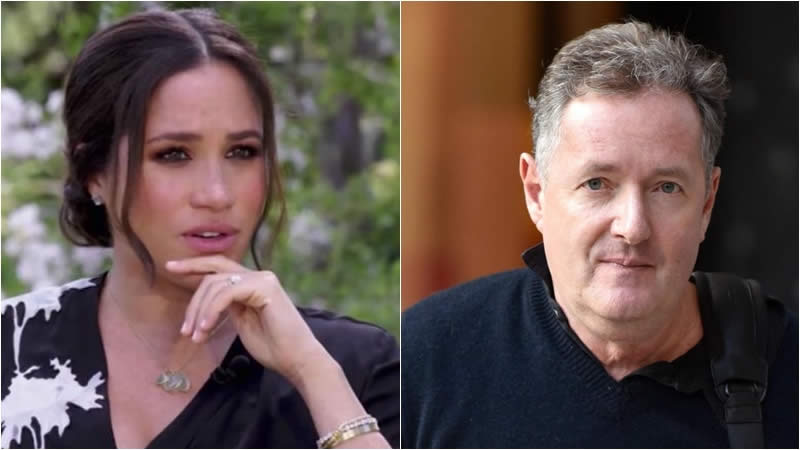 A UK media regulator has decided not to take action against Piers Morgan for his negative on-air comments regarding Meghan Markle, following an investigation.

While co-hosting ITV’s Good Morning Britain in March, Piers criticized Meghan during her and Prince Harry’s tell-all interview with Oprah Winfrey, stating he didn’t trust her words, which included a bombshell revelation that she’d had suicidal thoughts as a working royal and was supposedly denied help. The journalist, who has been a lifelong opponent of Meghan’s, got into an on-air argument with weather presenter Alex Beresford over his remarks, went off the set, and then quit his job.

Meanwhile, the duchess and 50,000 others filed complaints against Morgan with ITV, prompting media regulator Ofcom to open an investigation. The group published its decision on September 1st.“Ofcom is clear that consistent with freedom of expression, Mr Morgan was entitled to say he disbelieved the Duke and Duchess of Sussex’s allegations and to hold and express strong views that rigorously challenged their account,” Ofcom said in a bulletin. “The Code allows for individuals to express strongly held and robustly argued views, including those that are potentially harmful or highly offensive, and for broadcasters to include these in their programming. The restriction of such views would, in our view, be an unwarranted and chilling restriction on freedom of expression both of the broadcaster and the audience.”

In response, Morgan later tweeted; “I’m delighted OFCOM has endorsed my right to disbelieve the Duke & Duchess of Sussex’s incendiary claims to Oprah Winfrey, many of which have proven to be untrue. This is a resounding victory for free speech and a resounding defeat for Princess Pinocchios. Do I get my job back?”

In its bulletin, Ofcom said that the March 8 episode of Good Morning Britain “focused on the interview between Oprah Winfrey and the Duke and Duchess of Sussex. It contained statements about suicide and mental health which had the potential to be harmful and highly offensive. However, our decision is that overall the programme contained sufficient challenge to provide adequate protection and context to its viewers.”

Meghan, who was then a mother to Archie Harrison, 2, and pregnant with Lilibet “Lili” Diana, now two months, told Oprah that before she and Harry had children, someone in the royal family expressed “concerns” about the colour of their first child’s skin. Later, Prince William, the Duke of Sussex’s brother, informed a reporter that the royal family was not racist.

“If you have two parents, one’s white and one’s black, as in Meghan’s case, and she’s pregnant and going to have a baby, is it racist and offensive for a family member to say, ‘Oh, what colour might the baby be?’” Piers asked a panel on Good Morning Britain on March 8. “I mean, I would imagine in most families, that might be a question they think and might ask, but not in a racist or derogatory manner.”

In its bulletin, Ofcom stated, “While we acknowledged that Mr Morgan’s questions about the nature of racism had the potential to be highly offensive to some viewers, the conversations about race and racism in this Programme provided open debate on the issues raised by the Interview,” the group continued. “Despite strong opinions expressed during the Programme, in Ofcom’s view any potential offence was justified by the context and the comments and discussions about race and racism were not in breach of Rule 2.3 of the Code.”

The REAL Reason behind Naomi Osaka’s Withdrawal from French Open