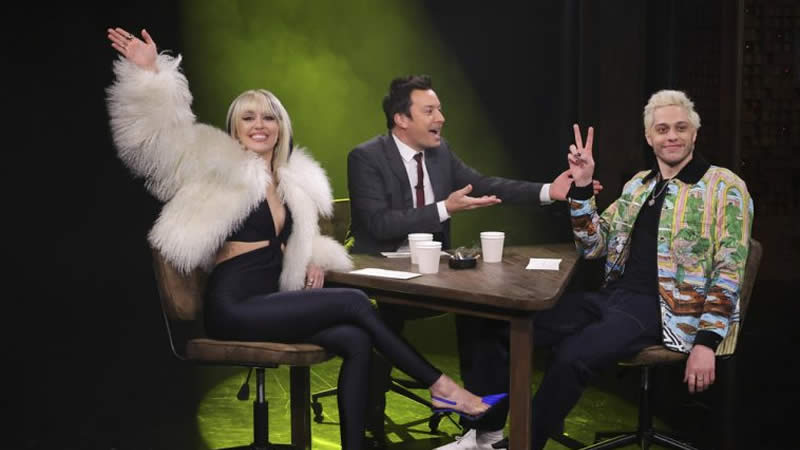 Pete Davidson and Miley Cyrus are teaming up for her New Year’s Party Eve show and the duo seem to be leaving fans impressed with their camaraderie. In their recent appearance on Jimmy Fallon’s talk show, Pete and Miley showed off their friendship and the latter even serenaded him with a number where she referenced his Kim Kardashian romance.

During her latest appearance on Tonight Show Starring Jimmy Fallon, which also happened to be her first in-person attendance at the talk show amid the pandemic, Miley belted out a cover of Yvonne Fair’s It Should Have Been Me and it wasn’t just a random pick for her considering she serenaded Pete with it and said, “Pete Davidson this song is for you. When I saw those photos, this is what I played.”

While singing the track, Miley also added a few lyrics of her own as she referenced Kim and Pete’s dinner date and how they left together in a Lamborghini. She also further trolled him in the song by adding, “Pete Davidson, how did you do this to me.”

While Miley won everyone’s hearts with her brilliant performance and her hilarious additions about Pete’s romance to it, the Saturday Night Live cast member couldn’t stop himself from giggling as Miley sang.

There’s no denying that their talk show appearance has certainly gotten netizens excited about their collaboration for the New Year show. Miley had also previously taken to Instagram to share a photo of the duo along with a caption that immediately grabbed eyeballs as she wrote, “BIG DEBUT ENERGY. Pete & I are official! Watch @fallontonight Our first show together as a pair! We’ll be talking about #MileysNewYearsEveParty in Miami!”