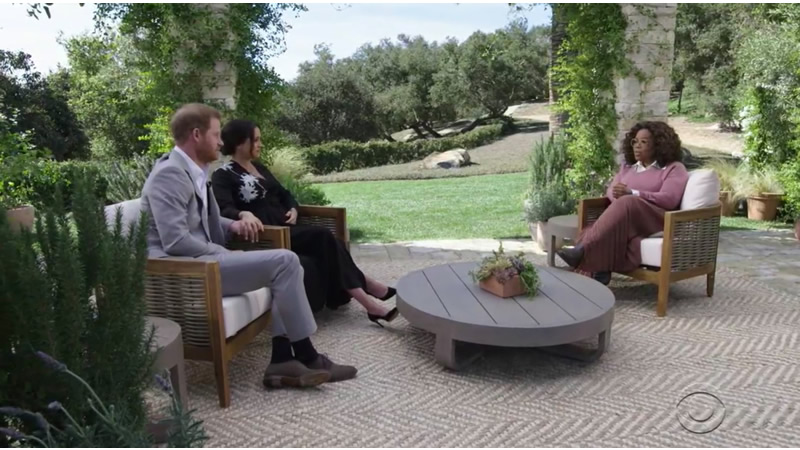 The historian also accused Meghan of “persuading” Harry to “demand” for them to move abroad while keeping their royal status as they became a “high-earning celebrity couple”.

Ms Dudley Edwards claimed that when the Queen refused they hit back with the incendiary interview – which the historian warned was “backfiring”.

Writing for News Letter, she said: “The truth is that Meghan, bored by the mainly mundane duties of royalty and deeply resentful of the hierarchical primacy of William and Kate, persuaded her fragile husband to demand the right for them to live abroad and retain the status, income and privileges of working royals while carrying out only the duties that suited and together carving out a career as a high-earning celebrity couple.

“When the Queen told them they could not have the royal cake and eat it, they retaliated by complaining to an audience of billions that they’ve been badly treated. It’s backfiring. Pity about Harry.”

Ms Dudley Edwards cited Meghan’s claim that she and Harry secretly tied the knot in their “backyard” days before their royal wedding.

But the couple has since admitted this was an exchange of vows.

The historian also highlighted Meghan’s suggestion that Archie was not made a prince because of his race.

But the Sussexes’ son, who is seventh in line to the throne, is not entitled to be an HRH or a prince due to rules set out more than 100 years ago by King George V.

Ms Dudley Edwards also questioned Meghan’s claim that she no longer had access to personal effects such as her passport after joining the Royal Family.

The historian pointed out that the ex-Suits star made a series of trips abroad when she was a working royal, including her extravagant New York baby shower.

Following Meghan and Harry’s interview, the Royal Family made clear they did not agree with all of the Sussexes’ claims.

A statement released by Buckingham Palace said how “some recollections may vary”.

US presenter Gayle King said Harry’s talks with his father Prince Charles and his brother Prince William in the wake of the interview were “not productive”.

Meghan and Harry quit as working royals in March 2020 for a new life in America.

The couple, who are expecting their second child, are living in a mansion in California with their young son Archie.

They have signed lucrative deals with Netflix and Spotify to make shows and podcasts.

And it has emerged this week that Harry has two new jobs.

He is to join the Aspen Institute’s new Commission on Information Disorder and is also taking on the role of chief impact officer at US professional coaching and mental health firm BetterUp.