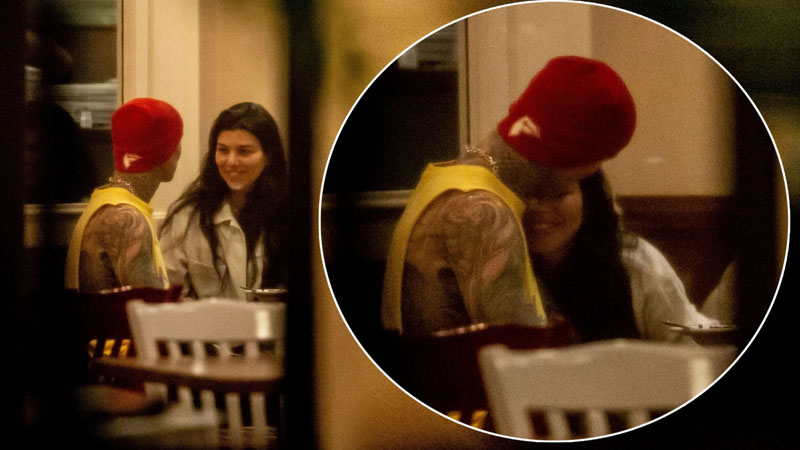 Kourtney Kardashian and boyfriend Travis Barker were spotted out to dinner at the Italian restaurant Rosti Tuscan Kitchen in Calabasas, California.

According to the details, Kardashian, 42, and Barker, 45, were seen sitting together on the same side of the booth at the restaurant as seen in photos posted by Page Six on Tuesday.

The Keeping Up with the Kardashians star and the Blink-182 drummer enjoyed a romantic dinner date where they kissed, laughed and even appeared to take selfies while cuddling close inside Rosti Italian Kitchen.

“They were very sweet together,” an eyewitness told E! News. “Travis put his arm around Kourtney and they looked at the menu and their phones together. They were completely focused on one another and never took their eyes off of each other.

They talked, laughed, and kissed throughout dinner. Kourtney wrapped her arms around Travis and rested her head on his shoulder. She looked like she wanted to be as close to him as possible. He rubbed her arm as she nuzzled his neck and they stayed like that for a long time.”

The eyewitness also said Kourtney and Travis “held hands as they made their way to their car.” The two “seemed crazy about each other and very much in love,” they added.

Page Six published several paparazzi shots that captured the lovebirds seated at their table, as well as a full-body photo of the two leaving the eatery, which displayed in detail what they were wearing.

Kardashian sported a long, black peacoat and a white T-shirt with an array of NSFW phrases on it. Meanwhile, Barker kept things casual, wearing a white graphic tee under a brown bomber jacket that was covered in an array of pins on one side.

Last month, Kardashian confirmed her romance with Barker on social media and shared a photo of them holding hands. At the time, the Blink-182 drummer posted the same image on his Instagram Story.