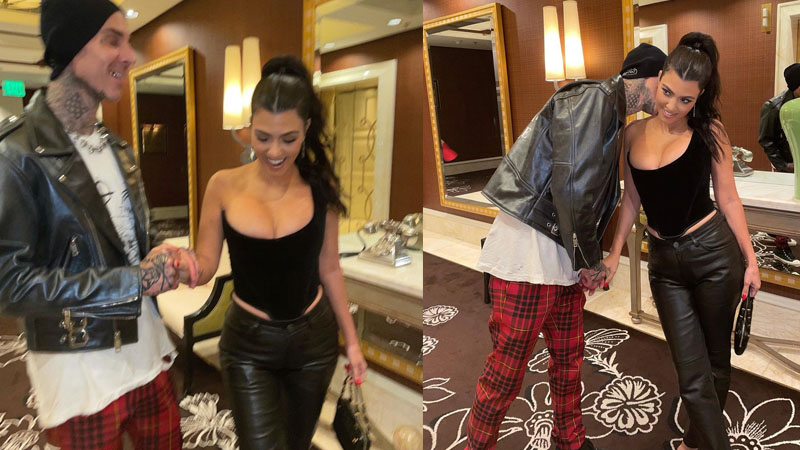 Some recent clues on social media have some fans asking the same question: Are Kourtney Kardashian and Travis Barker married? The pair, who reportedly began dating in December 2020, has some convinced that they have secretly tied the knot while on a recent trip to Las Vegas.

The Keeping Up With the Kardashians star, 42, and her boyfriend Travis, 45, attended the UFC fight between Connor McGregor and Dustin Poirier over the July 9 weekend in Vegas. While they were in the City of Sin, the couple snapped a series of sweet photos together.

Kourtney, for her part, captioned the photos with a cheeky quote: “What happens in Vegas,” she wrote, alluding to the famous phrase that ends in, “Stays in Vegas.” While it may not seem like it meant much at first glance, some social media users are beginning to think it may have been a hint about getting eloped.

But the speculation doesn’t end there. According to Hollywood Life, some people are who are close to the couple have since shared cryptic comments in response to Kourtney’s post. Travis’ daughter, Alabama Barker, 15, was among those who shared Kourtney’s post to her Instagram Story. “So happy for you guys,” the teen captioned the photo, along with a heart and cute face emoji.

The Poosh founder’s hairstylist, Glen Coco, also reshared the reality star’s photo with a teasy comment: “…NOWWW I understand why ppl tie the knot in Vegas. There’s nothing like love AND a good time,” he wrote, along with emojis of a chapel, a crying face, and a string of black hearts.

Needless to say, the comments have led some to wonder if Kourtney and Travis are already married. While neither has confirmed nor denied the speculation, sources previously revealed that the pair were keen to tie the knot.

In April, an insider told Hollywood Life that Travis would “love to get married to her,” but that it simply wasn’t something she was “considering” at the moment. Her hesitancy, however, reportedly had to do with how getting married may impact her ex, Scott Disick. “Those are primary reasons,” the insider explained, referring to the Flip It Like Disick star, 37. “Travis gets that though and he’s very respectful and understanding of her situation with Scott.” – stylecaster

Prince William Is In Great Trouble! Being Slammed For Condemning Racism In Sports But Not In Firm