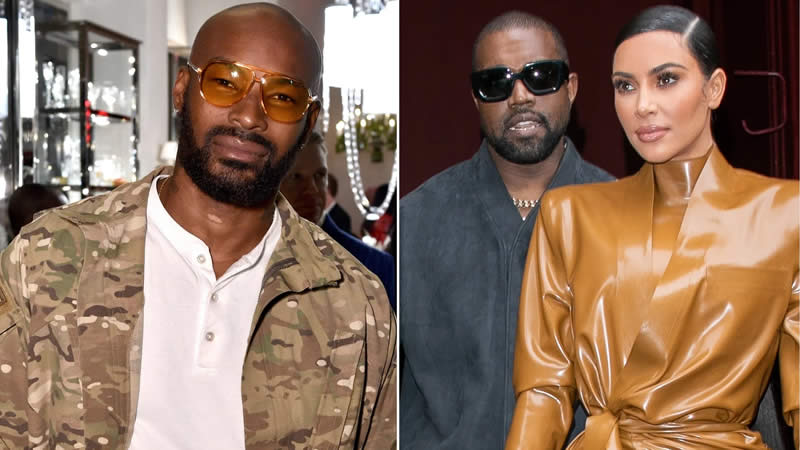 Kanye West tried to “get tough” with renowned model Tyson Beckford in 2018 when Beckford accused West’s then-wife Kim Kardashian of getting plastic surgery and criticized her on social media about it.

According to the details, Beckford, 50, eventually ran into West, 43, at Ralph Lauren’s 50th anniversary party, where Beckford revealed he “tried to get tough with me.”

“I was standing in the middle of Oprah Winfrey and Hillary Clinton. He was on the other side of the table, and when I tried to make eye-contact with him, he wouldn’t look at me,” Beckford recalled on the Instagram show Let’s Go Live! with Sharon Carpenter.

Tyson Beckford says Kanye’s henchman then approached him in the bathroom, but the 50-year-old was prepared.

“I suggest you get out of this bathroom before I wipe you all over the wall,” he told the man. “I’m like, ‘You did not want no smoke.’ I had on my tuxedo. I would have undone my tie and got into it if you wanted to, but you didn’t. I think you didn’t realize how big I was.”

West eventually called him out in an Instagram video “two weeks later” according to Beckford, who suggested he was too afraid to approach him in person at the Ralph Lauren event.

“I’m gonna show you who she is,” he said at the time. “As a matter of fact, she needs to be kicked out right now or I’m leaving. Right now, let me show you. Do you wanna do that or do you want me to leave? I’m very ashamed that you asked that trash question. You have to go. You have to go.”

Kanye West and Kim Kardashian are currently amid a high profile divorce after seven years of marriage, something Beckford acknowledged with, “They’re going through some hard times right now. My whole energy is positive.”

Victoria Beckham is a Nervous Wreck Ahead of Fashion Shows