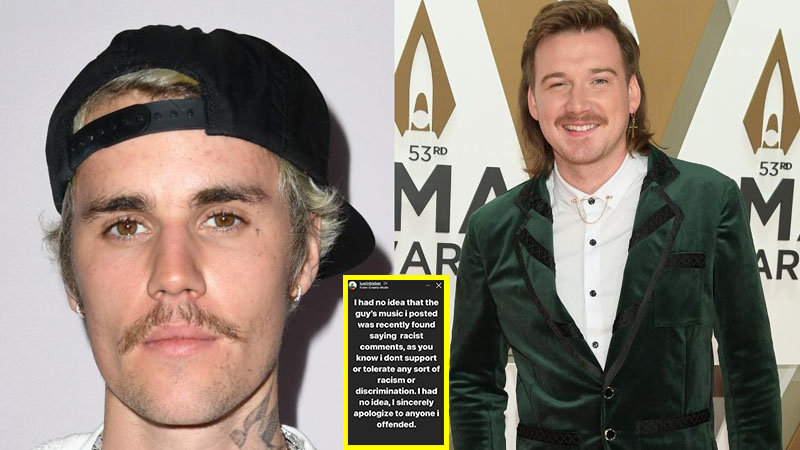 On Wednesday, Justin Bieber apologized for sharing music with controversial country singer Morgan Wallen. After posting a screenshot of Wallen’s Dangerous: The Double Album with the caption “Love this album,” the singer then retracted his now-deleted statement and explained that he was unaware of the ongoing controversy surrounding the country musician.

He stated, “I had no idea that the guy’s music I posted was recently found saying racist comments, as you know I don’t support or tolerate any sort of racism or discrimination. I had no idea, I sincerely apologize to anyone I offended. He added, “When I was a kid, I was incredibly ignorant and said some very hurtful racist jokes that clearly were not funny.

I hurt a lot of people, especially the Black people in my life but was fortunate enough to have had them educate me on the horrifying origin of the n-word. This brings those painful memories back up. I will always take ownership for my ignorance and my past because I know I am not that person.”

According to The Hollywood Reporter, Wallen made news earlier this year after he was caught on camera using a racial slur in a video posted by TMZ in February. The video, which went viral, showed Wallen arriving home with a group of buddies and hurling profanities, including the N-word. He later apologized, admitting that he was on “hour 72” of a bender and that he had disappointed many people, including his parents.

After the controversy, Wallen’s recording contract with Big Loud Records was terminated, and his music was removed from many radio networks. However, in an interview with Good Morning America last month, Wallen admitted that he only used the N-word within a small number of friends, but acknowledged it was “ignorant” and “bad.” He also admitted to checking into a rehab clinic in San Diego, California.

5 Affordable Style Tips to Help You Achieve That Celebrity Look