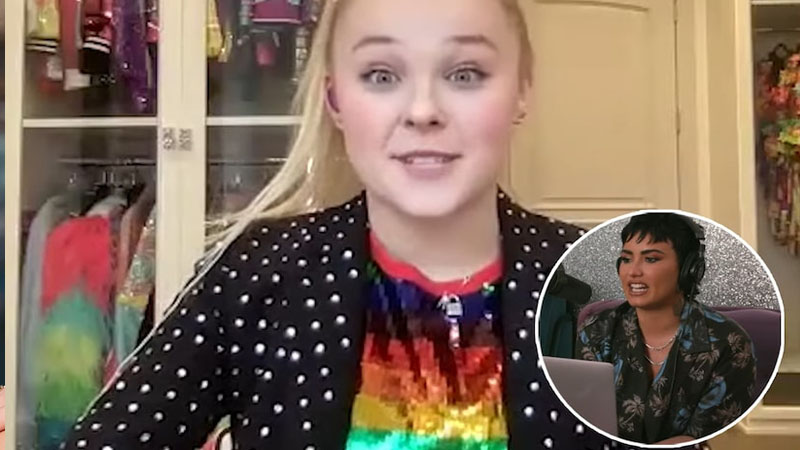 The “Dance Moms” alum also revealed the reason why she holds your fire to come out until this year. Jojo Siwa went back at her “gay awakenings.” On Wednesday’s episode of Demi Lovato’s podcast, “4D with Demi Lovato,” the “Dance Moms” alum, 18-year-old Nickelodeon star shared the moments that flickered her sexual awakening.

“I’ve been figuring out my gay awakenings recently,” began JoJo, who came out as a member of the LGBTQ+ community back in January and identifies as pansexual. “I think I realized that my very first gay awakening was Jenna Dewan’s performance on ‘Lip Sync Battle.’ I think that was one of them.”

She continued, “But do you remember your dancer, her name is JoJo Gomez, and you did ‘Cool for the Summer’ together? I remember seeing that and just being a little too interested.”

“I want to share this, but I don’t know how yet,” JoJo chimed in. “Yes. I’m so happy you can see a little glimpse of that pride through that performance,” said Demi, who came out as non-binary in May.

Jojo opened up that Demi also flashed a “gay awakening” for her girlfriend, Kylie Prew. “Yesterday I was talking to my girlfriend, Kylie, about our gay awakenings,” JoJo recalled, “and she said she went to your concert and it was that concert — she would have probably had to have been 12, maybe, or 13, and she was there with her mom.”

“I’m so happy I could play a role,” Demi said with a laugh. Also, amidst the chat, JoJo confessed that she “always knew” she was gay but said she stopped herself to exposed publicly until she was in a relationship.

“I always knew with me, but I always said I’m not going to do anything with it or be like, ‘Hey, by the way, I’m gay, but I’m not in love with a girl yet,'” she shared. “I was like, ‘I’ll wait until I actually have a girlfriend or I have a girl that I’m in love with and I’ll do something with it.’ And that happened.”

JoJo claimed she then paused until her girlfriend and her family was “ready” before she came out, toofab wrote.

“The only thing that held me back from telling the world right away was my girlfriend’s family and my girlfriend because I wanted to make sure that she was ready,” she said to Demi.

“The internet kind of outed me for me and all I had to do was confirm it,” she added with a laugh. “What happened was I did a TikTok with these TikTokers and they kind of out me. They were like, ‘Oh my god, I feel so bad. We don’t want people thinking this about you.’ And I was like, ‘Well truthfully, I don’t mind it because it’s true.'”

Royal nannies tell all! What it’s like raising young royals

5 Ways to Show Your Wife Appreciation

Chris Hemsworth says he is still not considered a ‘serious actor’