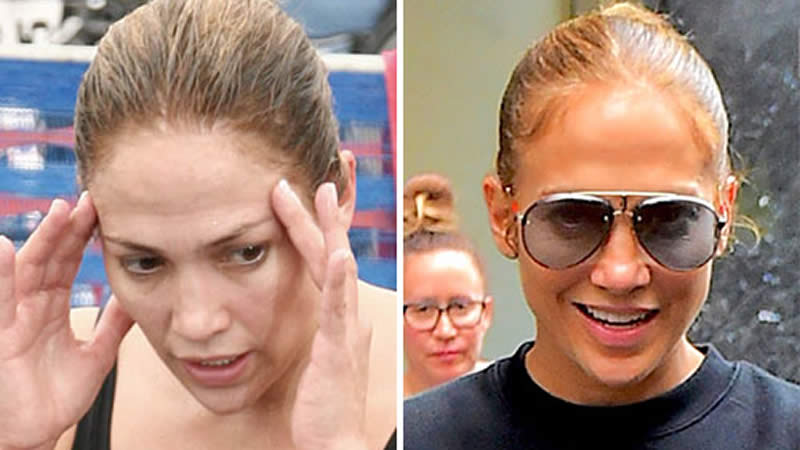 Jennifer Lopez has been embroiled in controversy over the last several months as rumors of Botox, which she has staunchly denied, have swirled around her. Lopez, who just released her very own skincare line in January of this year, has accredited her flawless skin to the secret ingredient olive oil, and became defensive when the media began to question if that’s all she really uses to treat her complexion.

However, in a series of before and after photos recently posted to Instagram, Lopez can be seen with forehead wrinkles in the early 2000’s, and is now rocking a suspiciously smooth complexion.

In an Instagram post shared by @igfamousbydana, a number of side by side shots of Lopez can be seen comparing her early 2000’s appearance to now. Lopez famously competed in a triathlon in 2008, and in images from the day, she can be seen with a normal amount of expression wrinkles on her forehead. However, in the photo next to it from just last year, Lopez can be seen making a similar expression with not a single wrinkle on her face. Is her new skincare line really that good?

The account that shared the collection of images wrote a lengthy caption about Lopez’s denial of Botox claims, expressing her frustration with the narrative the singer has created. “My biggest issue with her quote about Botox (“I’m just not that person”) is that it sounds like a character judgement,” she says.

While Lopez is undeniably a natural beauty, there is a noticeable difference between the early 2000’s photos and now. Her skin was flawless in both eras, but J Lo can be seen with some natural smile lines and forehead wrinkles that seem to have disappeared over time. @igfamousbydana didn’t take issue with the potential that Lopez had gotten Botox, but rather the implication that it would have been shameful if that were the case. Regardless, it seems that J Lo is sticking to her story; maybe olive oil is to thank for her impeccable appearance.

Is The Mark of the Beast Launching Right Now In New York City?

Helen Mirren Shares Why Playing the Villain in ‘Shazam! Fury of the Gods’ Means So Much to Her (Exclusive)