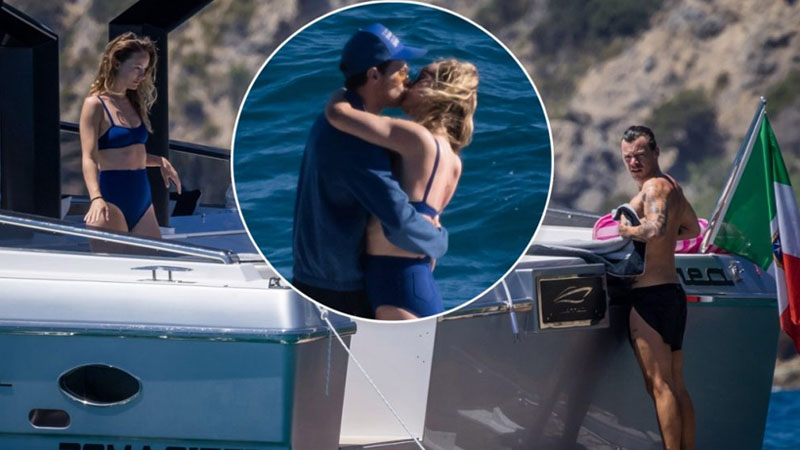 Yesterday evening, a million hearts were broken. Fans by now know that their favorite Harry Styles is dating filmmaker Olivia Wilde. They both united for the film, Don’t Worry Darling. But the duo couldn’t resist each other’s charm and started dating soon after.

Pictures from their steamy yacht outing from Italy are now going viral! And guess what, Taylor Swift & Louis Tomlinson have been hilariously spotted alongside too. Below is all the scoop you need.

As many know, Harry and Olivia are currently on a vacation in Italy. The duo has been spending some quality time since last week at Monte Argentario. Things took a way romantic turn when they were spotted kissing, reading, going for a dip in the sea amid the waters yesterday.

Pictures obtained by Page Six have been going viral all over social media platforms. It witnesses Olivia Wilde in a navy blue bikini. Harry Styles, on the other hand, wore a navy blue sweatshirt with black shorts and went shirtless during their steamy session!

As the pictures of Harry Styles and Olivia Wilde from their yacht outing went viral, netizens have been trying their own creativities. Former One Direction co-member Louis Tomlinson began trending soon after the pictures surfaced online. If that isn’t it, netizens even created memes spotting Taylor Swift on the boat alongside the couple.

A netizen shared a hilarious meme that read, “when you feel sad remember that harry kissed the statue more willingly than with olivia wilde”

This Skintight Bodysuit Is The Sexiest Thing Kylie Jenner Has EVER Worn–We’re Blushing For Her!