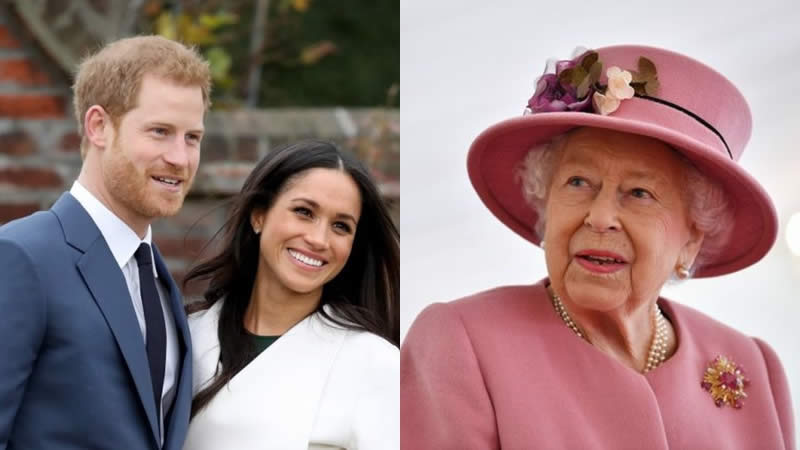 It has been reported that Meghan Markle and Prince Harry have offered to introduce the Queen to her namesake great-granddaughter Lilibet in the coming weeks.

Despite reports of tensions between Prince Harry and his brother Prince William, as well as other members of the royal family, the Duke of Sussex is said to be on good terms with the Queen.

Following the criticism from the Oprah interview, there have also reportedly been several “olive branch” calls to the palace.

The Duke and Duchess of Sussex have asked the Queen to travel in to see Lilibet, who is only four months old.

This would be Harry’s third visit to the UK, and Meghan’s first since the couple renounced their royal duties in March 2020.

As per the Sun, insiders say that Harry has been contacting home in preparation for Lilibet’s christening, with Windsor Castle being mentioned as a possible venue.

Courtiers are “shocked by the sheer nerve” of the request to see Her Majesty, according to royal sources.

A source said: “Harry and Meghan have made this offer but a lot of people are shocked by the sheer nerve of it. They may genuinely want to see the Queen but it’s breathtaking given what they’ve put her through this year.

“Her Majesty’s staff have not responded so far. In fact, there has also been discussion about Christmas — and whether an invitation should be sent to Harry and Meghan after they spurned one last year.”

The Queen adores Prince Harry and would love to meet her great-grandchildren Archie and Lilibet, according to the source.

Lilibet was welcomed in June by the Sussexes, who are now based in California, although it’s unknown whether they asked the Queen for permission to name her after her nickname.

Though the Queen may still “be fond” of her grandson, royal analysts claimed earlier this year that she may respond to his planned tell-all book with an “insult.”

They stated that she may ‘insult’ the couple by depriving them of a reaction.

The Sussexes are unlikely to attend Her Majesty’s Diamond Jubilee celebrations in London next year, according to Ingrid Seward, the editor of Majesty magazine.

She claims the Queen won’t react to the situation, because she would be playing into Harry and Meghan’s hands.

Despite tensions with his brother and father, Prince Harry has always had a close relationship with the Queen, insisting she’s still his ‘Colonel-in-chief’.

The announcement that the Sussexes were stepping down from royal duties last year was said to have ‘blindsided’ the Queen, but the duke has always maintained that he has too much respect for his grandmother to make the decision without consulting her.

While it would have caught the British people off guard, royal experts indicated last month that it is possible that the monarch planned for that very eventuality.

The Queen was one of the only members of the royal family who was spared from Harry’s criticism during a bombshell interview with Oprah Winfrey.

He claimed that his brother Prince William was “trapped” by the royal system and that his father, Prince Charles, had financially cut him off.

Harry has only returned to the UK twice since he and his wife Meghan left at the beginning of 2020: for Prince Philip’s funeral in April and for the unveiling of a statue of his mother Princess Diana in July.