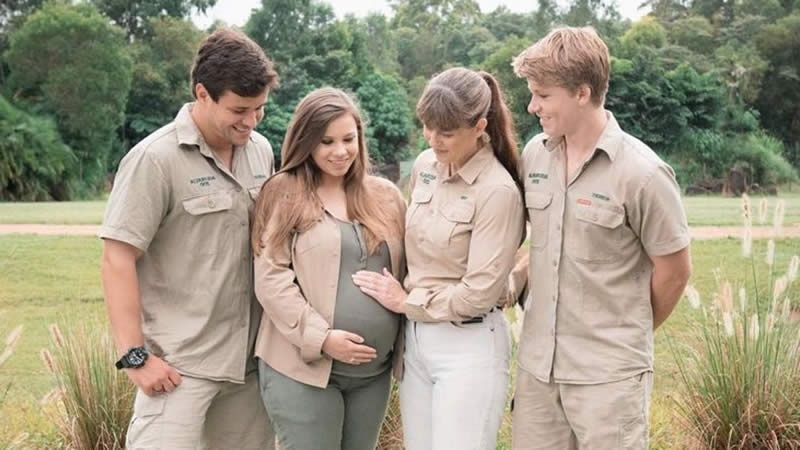 We’ve been following Bindi Irwin’s pregnancy since she announced she was expecting her first child, and boy has it been a wild ride! Irwin adorably nicknamed her unborn daughter “baby wildlife warrior” and we simply can’t wait to see her and Chandler Powell become parents to their little one. And well… it seems like we’re not the only ones eagerly refreshing the couple’s Instagram page for new updates. Irwin’s due date should be any day now and Powell’s most recent cryptic post has fans thinking it’s a clue the two have already welcomed their baby into the world. (See the post here.)

Hanging out with a crew of kangaroos, a smiling Powell and Irwin look so happy to be surrounded by the wild animals. (Bindi posted a kangaroo pic on her own Instagram, too.) Powell captioned his post, “Another day of important meetings at #AustraliaZoo 🦘.” And enter the super-sleuth fans!

Analyzing Powell’s caption, one commenter wrote, “Is it a ‘meeting’ of the new baby? 😍😂 lol just kidding. We are all just a bit excited ❤️.” In the photo, Irwin is kneeling, and notably has her knee and leg blocking the full view of where her baby bump should be, which had fans putting on their detective hats. “I’m betting baby girl is already here! not many 9 month pregnant women can squat down like that 😉,” a different Instagrammer commented. Yet another fan asked, simply, “Did Bindi have the baby?” while another wrote, “She’s already had the baby.”

But much to the dismay of fans who have seemingly pieced together the mysterious post — yet another Instagram user pointed out that Powell’s post is a repeat post from 2020, and therefore doesn’t shed any light on the couple’s current situation. Hey, we get it! We also are so excited for the two and we don’t really blame anyone for overanalyzing a celebrity post, but we’re sure that Powell and Irwin will share the news — when there’s any — news to share, that is — when they’re ready.

One fan summed it up best on Powell’s post: “For people asking if Bindii has had the baby yet and commenting on how the photo looks, you know women can work right up until the baby arrives? (I personally know several women who continued daily activities until 40 weeks and they were doing more than just squatting) Baby will come when baby is ready. They are entitled to their privacy and Bindii and Chandler have kept the world informed in their own way and time. Just chill 😁.”