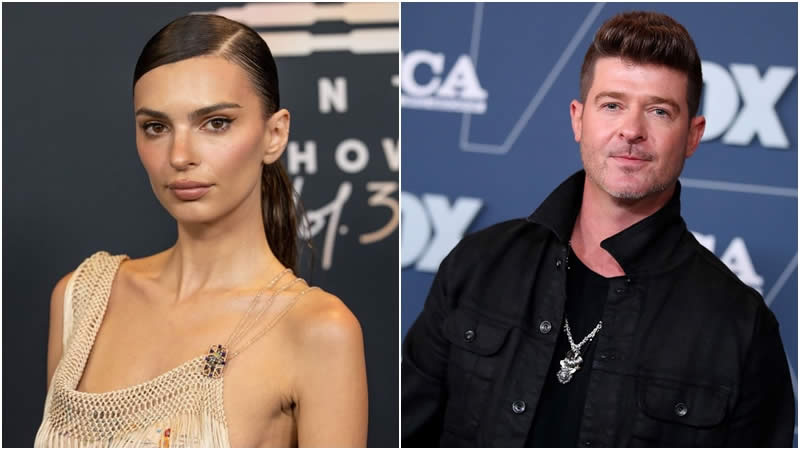 Emily Ratajkowski is furious that her allegation about Robin Thicke groping her breasts on the set of “Blurred Lines” was “leaked” before fans could read about it in a context in her upcoming book.

While the words were drawn from her upcoming book, My Body, the model doesn’t agree with how they were exploited by London’s The Sunday Times — and picked up by other news outlets.
“What’s frustrating is I didn’t come out with it, it was leaked,” she told Extra on Monday night.

According to the newspaper, Ratajkowski initially liked making the video, which relied on an all-female team. Her feelings were changed one day on the L.A. set when Thicke, who was “a little drunk,” grabbed her.

“Suddenly, out of nowhere, I felt the coolness and foreignness of a stranger’s hands cupping my bare breasts from behind. I instinctively moved away, looking back at Robin Thicke. He smiled a goofy grin and stumbled backward, his eyes concealed behind his sunglasses. My head turned to the darkness beyond the set, The director’s voice cracked as she yelled out to me, ‘Are you OK?'” Ratajkowski said that she felt “humiliation” pulse through her body, but she didn’t react.

Ratajkowski stated that she didn’t intend for the experience to be shared in this manner when she decided to write her book.

“It’s been hard for me, I really like to have control over my image and I wrote this book of essays to share the whole story and all sides of it, and I feel like it turns into a clickbait frenzy and all of a sudden words like ‘sexual assault’ and ‘allegations’ are getting thrown around rather than people reading the actual essay. I’m just looking forward to when people will be able to hear things in my own words.”

She added, “Everything I talk about is about the evolution of my politics and it’s not some big reveal, it’s not some crazy thing, it’s a part of a larger essay. I’m just excited for people to hold nuance and understand that.”