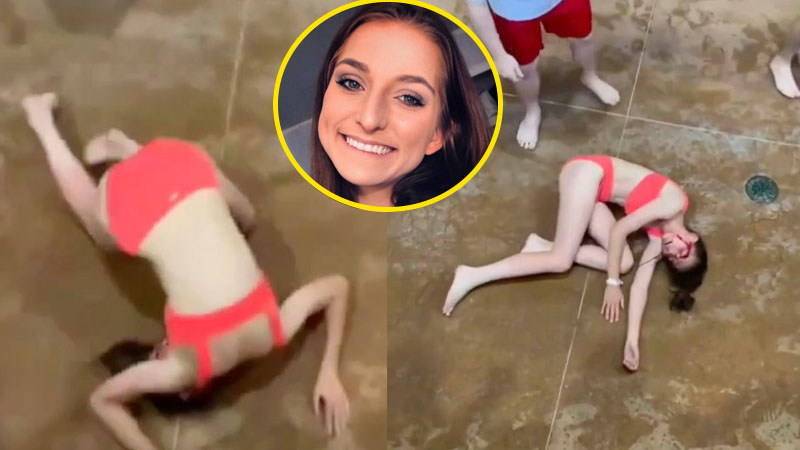 A drunk woman was left unconscious and was then arrested after she was body-slammed at an Ohio water park for line jumping.

According to the details, Brittany Cabay, 23, who is studying to be a cop, was picked up and thrown to the floor after a fight broke out between her and other park-goers. The incident led to two arrests and an intoxicated woman left bloodied and unconscious, video shows.

The footage, posted last Wednesday to YouTube, shows the 23-year-old, who is studying to be a police officer, as she is hurled head-first into the ground while around ten people in swimsuits trade punches with each other.

An emergency medical technician (EMT) arrived moments later, the Sandusky Register reported, but was allegedly attacked by Colzin after he regained consciousness.

Cabay and her boyfriend Zackary Thomas Colzin, 24, were arrested following the fight at the Kalahari Water Park in Sandusky, Ohio, on May 17.

Cabay was arrested and charged with persistent disorderly conduct while intoxicated, resisting arrest and failure to disclose personal information. She was released from the Erie County Jail on a $14,000 bond.

Official reports said Colzin hit his head on the floor after he was tackled by a water park staffer and was unconscious when paramedics and deputies arrived at the scene. Once he was conscious he cursed, shouted racial slurs, and punched one of the deputies. He also threatened to self-harm.  He was tasered and placed under arrest.

Colzin, of Sterling Heights, Michigan, was charged with two counts of assault on a peace officer and an EMT, persistent disorderly conduct while intoxicated, resisting arrested, and a failure to disclose personal information.

Covid in Scotland: Plan to ease lockdown restrictions to be unveiled