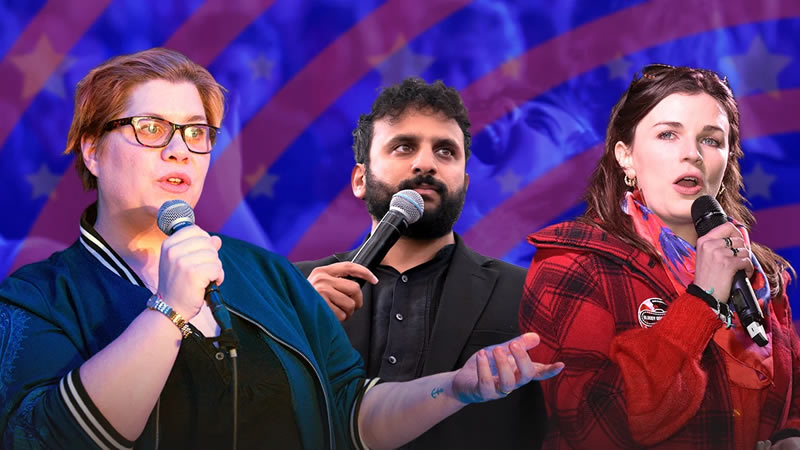 Aisling Bea, Nish Kumar and Katy Brand are among the comedians who have reacted after it was reported that new BBC boss Tim Davie is considering ‘axing left-wing comedy shows’ to tackle bias. The Telegraph has reported that the new director-general thinks the company’s comedy output can be perceived as one-sided and plans to restore the public’s ‘trust and confidence’ in the corporation.

According to the newspaper, plans include axing some TV and radio shows, although senior BBC sources suggested that nothing has been decided yet. The corporation has faced accusations for some time that its overall comedy offering is too left-leaning, and the paper has reported that those in charge of programming at the BBC will be expected to strike a more balanced view regarding their satirical targets and not just aim their jokes at the Conservative party.

Popular panel shows Have I Got News For You and Mock the Week are among those to have received complaints about their jokes against Conservatives and Brexit. Seemingly referring to the speculation that change may be afoot at the BBC, stand-up comic and actress Katy Brand tweeted: ‘Really looking forward to the Tory government being brilliant and sorting everything out, and Brexit being a huge success so they will no longer be a target for satire!’ She added: ‘I also think a quick count of all the jokes made about Corbyn during his tenure would be….useful?’

In another tweet, she wrote: ‘There’s a word for asking people in the media to support a government even when things are going very wrong… it’s called ‘propaganda’. Nish Kumar jokingly posted a simple ‘Good morning to you as well,’ in response to a journalist suggesting a joke-off between him and ‘right-wing comedian’ Jim Davidson. Kumar – whose name trended on Twitter following the suggestion of the BBC comedy overhaul – hosts the BBC’s satirical news programme The Mash Report, which was previously described as ‘unchallenged left-wing propaganda’ by BBC broadcaster Andrew Neil.

Aisling Bea – who regularly makes guest appearances on BBC panel shows, including QI – mocked the situation, posting: ‘Comedy about the party who is in charge of the country & at a time when everything is clearly going so bloody well MUST BE STOPPED. Communist-edians Out!’ Meanwhile, Geoff Norcott, who is considered a right-wing comedian thanks to his support of the Conservative party and of Brexit, slyly appeared to reference the story, tweeting: ‘Trying to keep a dignified silence. ‘But just to reassure people. I’ve dug out a bunch of clips where I didn’t do blackface or. mock the disabled. It can be done!’

However, the apparent move at the BBC was hailed by Conservative MP Ben Bradley, who told the paper: ‘In recent years lots of BBC comedy shows are just constant left-wing rants about the Tories and Brexit. ‘If the BBC is to truly represent all licence fee payers, that needs to change. ‘I’d like to see more right-leaning comedians given a chance rather than being effectively blacklisted for their views.’ He continued: ‘Tim Davie appears to be talking a good game on sorting bias at the BBC, but whether it’ll lead to real change, time will tell.’

Mr Davie took over as director-general of the BBC from Lord Tony Hall on Tuesday. He will deliver his first speech in the role on Thursday, in which he is expected to lay out his plans for the corporation going forward.

Kanye Denies being Paid by Republicans to Run for President

5 Ways to Develop Your Individual Style