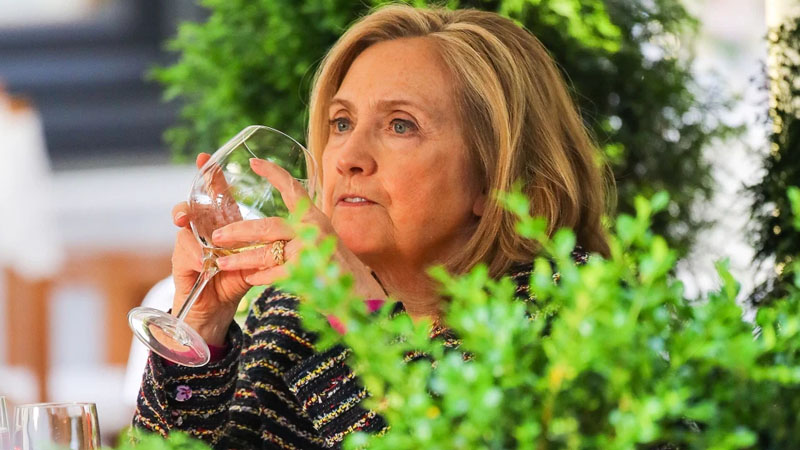 The former Secretary of State was seen using two hands to down a big glass of white wine at a posh Upper East Side restaurant on Tuesday evening.

Clinton was enjoying her beverage as she waited at Fleming by Le Bilboquet on 62nd Street near Madison Avenue for her hubby, Bill, and some pals, including rocker Sting’s wife, Trudie Styler, to arrive.

The 73-year-old former Democratic presidential nominee got to the chic eatery with a team of Secret Service protection at around 6:30 p.m., and didn’t wait long before her ex-president hubby showed up and took a few selfies with fans before sitting down at their table, according to The Daily Mail.

The former president was dressed in a blue suit with a checkered button-down shirt and no tie, while his wife wore a three-quarter-length striped coat.

The two were filmed chatting and laughing with a brunette woman and a young man in glasses before Styler, 67, arrived.

At one point, a waiter snapped a group photo, though Hillary apparently didn’t want to be in it, a bystander told the Mail.

Other photos showed the party engaged in a lively conversation during their meal, with Styler, who married the British rocker in 1992, at one point leaning her head on Bill’s shoulder.

Well-wishers descended on the Clintons when they left at around 9 p.m., according to the report.

The former secretary of state, who was the only one in a mask, was seen taking a selfie with a fan before she and Bill got into a car together.

The chic eatery made waves in 2019, when staffers there told the Post that they were required to Google any unknown guests and make sure they were rich or famous enough to grace the dining room.

Aside from the Clintons, celebrities who have dined there include Paul McCartney, Robert De Niro and Ivanka Trump.