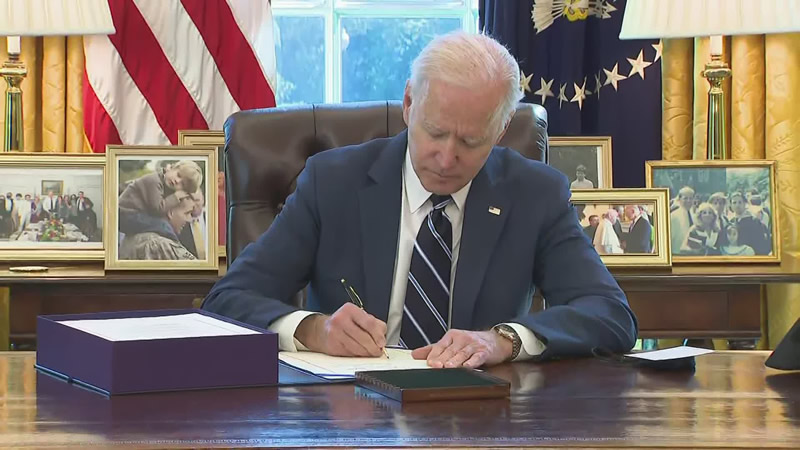 Psaki was asked directly whether or not Americans should expect executive orders on gun measures from Biden.

Psaki quickly and bluntly responded, “Yes,” and then bragged about 23 previous incidents when Biden was vice president, where the administration issued executive orders on gun control.

Psaki gave no timetable for when these measures would be enacted.

More on this breaking story from the Blaze:

“I will note that when the president was the vice-president in the Obama-Biden administration, he helped put in place 23 executive actions to combat gun violence,” Psaki added. “It’s one of the levers that we can use, that any federal government, any President can use to help address the prevalence of gun violence and address community safety around the country.”

“We have to address this epidemic, address the threat of gun violence across many avenues,” Psaki said. “And he will. He’s committed to doing that.”

“Executive actions are of course, an important lever that every president has at their disposal,” Psaki stated. “There’s current discussions and analysis internally of what steps can be taken,.that that has been ongoing for several weeks, even before these two recent tragedies, that he looks forward to getting an update on and seeing what can be moved forward on that front as well. So he’s not waiting for anything to fail, is really the answer to your question.”

Psaki noted that the Biden administration believes addressing gun access is “important,” as well as “addressing community violence and a range of issues that are root causes and kind of lead to the deaths and the impact that we’re seeing that’s so troubling.”

Last month, Psaki proclaimed that Biden “has a range of actions at his disposal” to bypass Congress to enact gun control measures, adding that the president “hasn’t ruled out” using executive power to address the issue.

On Friday, Biden may have hinted that one of his first actions on guns could have to do with 3D-printed guns and imported firearms.

“We are looking at what kind of authority I have relative to imported weapons as well as whether or not I have any authority to … these new weapons that are being made by 3D equipment that aren’t registered as guns at all,” Biden told reporters while on the tarmac en route to his home in Delaware. “There may be some latitude there as well.”

Biden is currently being called out by republicans who say he has no right to lecture Americans on the importance of gun control, after new information surfaced of a possible cover-up involving his son Hunter and an illegal firearm.

The New York Post has more on that incident:

The Secret Service intervened in an investigation into a 2018 incident involving Hunter Biden and his girlfriend at the time — his former sister-in-law, Hallie — in which she took his gun and tossed it into the trash, thinking he was going to kill himself with it, according to a report.

When she returned to retrieve the gun, it was gone, Politico reported on Thursday.

Police in Delaware launched an investigation in case the gun, left in a trash can across from a high school, had been used in a crime, the report said.

But Secret Service agents contacted the owner of the store where Hunter bought the gun and asked to take the paperwork recording the sale, Politico reported.

The owner, Ron Palmieri, at first balked at the request, suspecting they were attempting to hide Hunter’s ownership of the gun, but ultimately complied and turned over the documents to the Bureau of Alcohol, Tobacco, Firearms and Explosives, the government agency that oversees federal gun laws.

The Secret Service said it has no record of agents investigating the incident and said President Biden was not under protection at the time.

Then, several days later, the gun was returned by a man who searches trash cans for recyclables.

There were no charges filed or arrests in the incident.

The role of the Secret Service remains unclear.

But Politico got a copy of the transaction and a receipt from the Oct. 12 purchase.

Hunter answered “no” to the question on the transaction asking, “Are you an unlawful user of, or addicted to, marijuana or any depressant, stimulant, narcotic drug, or any other controlled substance?”

Hunter had been discharged from the Navy Reserve five years earlier after testing positive for cocaine and he and Biden family members have been open about his history of drug abuse, the report said.

Lying on the form is a felony.

At the time, Hunter was divorced from his first wife, Kathleen, and was involved in a romantic relationship with Hallie, the widow of his brother Beau, who died of cancer in 2015.

Hunter, when asked by police whether he had been doing drugs or drinking, replied: “Listen, it isn’t like that. I think she believes I was gonna kill myself,” according to the report.

Questioned about whether he had called his father, Hunter said: “I have never called my dad for anything,” according to the police report.

Hallie Biden, George Mesires, a lawyer for Hunter, did not respond to requests for comment by Politico.

The Secret Service said it had no record of its involvement.

“U.S. Secret Service records confirm that the agency did not provide protection to any member of the Biden family in 2018, and that the Secret Service had no involvement in this alleged incident.”

The White House also said the president was not aware of the Secret Service’s involvement.

“President Biden did not have any knowledge of, or involvement in, the Secret Service’s alleged role in this incident, and neither he nor any family member was a protectee at that time,” a spokesperson said.