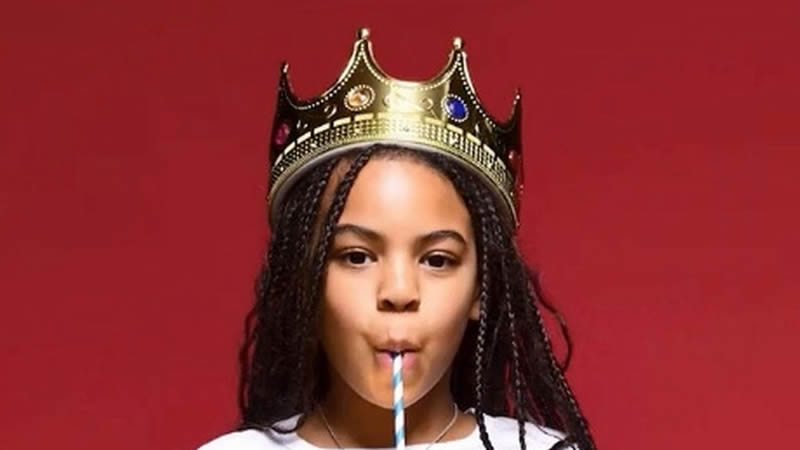 Beyonce’s daughter Blue Ivy celebrated her first Grammy in style as she drank juice out of her award.

The famous offspring has followed in her singing super star parents Beyonce and Jay Z’s footsteps.

Already she has had an award-winning start to her showbiz career at the age of nine, having made music history as one of the youngest people to ever win a Grammy Award.

Proud mum Beyonce shared a glimpse of her daughter celebrating her big win on social media.

The photograph was a nod to Jay Z’s own Grammy winning speech in 2014 where he gave a rare shout out to his daughter.

Jay cheekily said his award was going to be his daughter’s sippy cup.

He told the stars: “I want to tell Blue, Daddy got a gold sippy cup for you.”

Like a queen, Blue Ivy looked very regal in her crown when she posed for the sweet photograph.

The cheeky star was drinking her juice out of her first ever Grammy Award.

It was celebrations all round in the household on the glittering Grammy Awards night.

Beyonce broke records as she bagged another award making it her 28th Grammy win.

As well as a shared mutual love and talent in music, the mother and daughter have an incredibly close bond.

Speaking in an interview, Beyonce shared some rare insight on her daughter Blue in November last year.

The singer gushed her daughter was “very smart” and “aware” for her age.

She told Vogue : “Blue is very smart, and she is aware that there is a shift, but it is my job as a parent to do my best to keep her world as positive and safe as can be for an eight-year-old.”

Beyonce also revealed her daughter’s true sweet nature and how proud of her she is.

She added: “Blue saw some of the reactions to the Brown Skin Girl video, as well as some of the videos from the philanthropic work I’ve done this year.

“When I tell her I’m proud of her, she tells me that she’s proud of me and that I’m doing a good job. It’s teepee much sweetness. She melts my heart. I believe the best way to teach them is to be the example.”

Sean Hannity unaware commercial break is over, gets caught vaping